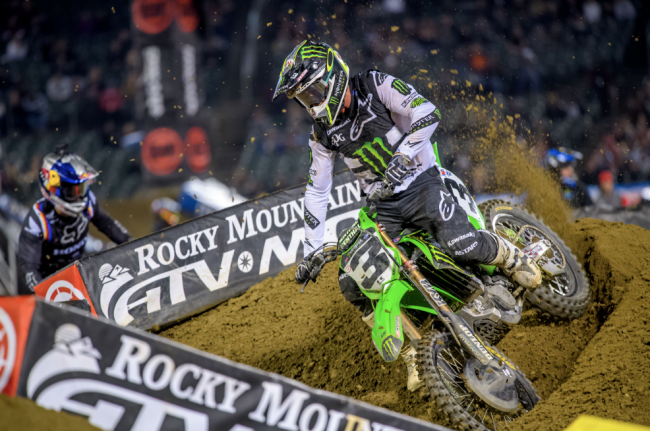 Tomac’s statement: After Ken Roczen beat Eli Tomca last week Tomac had to fire back quickly but in the heat race it was Roczen who got the better of Tomac and it pointed to Roczen continuing his momentum of last week but things would change! Tomac got passed early and pretty hard by his teammate Cianciarulo in the main to drop to third but, once he re-grouped, Tomac started clicking off the laps and with some great whoop speed started putting the heat on. He soon made his way into the lead then off the track and back to second, only to run down Roczen for the second in the main event time to take the win. It was a huge win for Tomac, and you could tell by the smile on his face. Tomac was looking at an 11 point deficit if Roczen had won but with Tomac winning and Roczen third, Eli is now only 3 points off the title lead, in what was a huge points and momentum swing in Oakland.

Faltering Roczen: It was looking so good for Ken Roczen when he was out from but to get run down twice by your championship rival then rammed out of the way in the final turn by the defending champion meant a good night ultimately ended badly even if Roczen was still on the podium. In addition he was nursing a sore foot after the contact from Webb, but Roczen remained positive saying he didn’t feel good all night and was happy to still take the podium, but his frustration was clear at the points he and momentum he lost, especially letting Webb get him on that last lap. Also slightly perplexing was Roczen going wide both times to let Tomac power up the inside of him, the German is usually the smartest racer on the track but letting Tomac pass him in the same spot was not the norm. Is Roczen playing the long game and not pushing beyond his comfort level on nights he isn’t feeling it or is he just struggling to hold unto Tomac’s pace when Eli is on?

Webb’s determination: Halfway through the main event Ricky Carmichael delivered a harsh but probably true assessment of Webb’s main event performance not being up to standard, after he started right with Cianciarulo, Tomac and Roczen then lost ground to the trio. Then, almost as if he heard RC’s words, Webb picked up his pace and started reeling the three of them in! He first dispatched long-time rival Cianciarulo before setting his sites on Roczen putting a classically opportune pass on the German. Webb willed himself to that second place, a fourth place wasn’t getting the job done and he made things happen, and with that rid Webb has kept himself in the title hunt, now 18 points behind Roczen, and was reminiscent of the fight he had in him last year.

Barcia hanging on to title hopes: Props to the Justin Barcia! The Yamaha man has been hanging in there in the championship fight but when a mechanical took him out of the heat race it looked like it might be a step to far to get anywhere near the top five in the main. But Barcia kept at it, got in through the LCQ, and worked his way to sixth to stay in contention, sitting third in the series just 13 points behind Roczen. However, Barcia definitely needs to start up front again and make his presence felt in the title fight with Tomac and Roczen establishing themselves as the men to beat on a weekly basis and a resurgent Webb back in the mix as well as Cianciarulo and Anderson rounding out the big six who are all still within striking distance of the title.