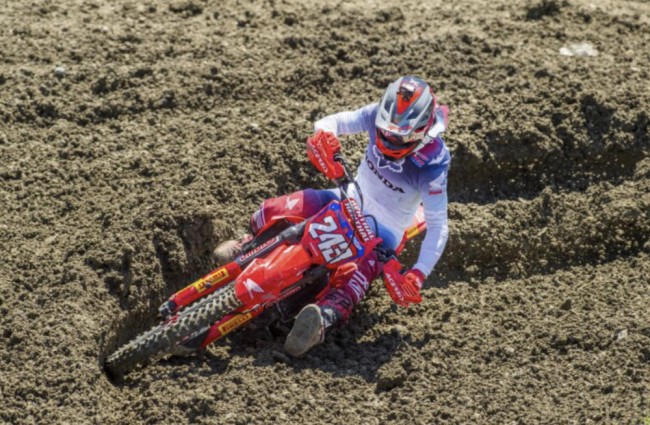 This was a day of statements by the defending world champions!

What an epic performance by Tim Gajser. This was a performance of authority and control from the MXGP world champion who wasted no time getting to the front in race one and not afraid to make contact to do it but that ride in race two was something else. Gajser has had issues at times coming through the field when Herlings is in the race but in Russia he looked completely in control, no panic, no risk, he was just on a different level to anyone else on Sunday.

For me this is the best performance of Gajser’s career, he looks at one with the bike and full of confidence. Yes Herlings and Prado weren’t at their best but they now they can be nothing less than 100% on their A game if they want to wrestle the world title away from a simply supreme Tim Gajser this year -especially if the Honda rider is going to be on this level all year. Tim Gajser has set the bar high in 2021, now it’s over to everyone else to see if anyone else can get to his level.

Tom Vialle was faultless in both motos and anyone who thought Vialle would be less motivated or under more pressure knows that isn’t the case! The Frenchman even made light work of Hofer and Fernandez in race two when he didn’t get the holeshot, to take the lead quickly in lap one. It’s a deep field in MX2 but right now Vialle is proving to be in a class of his own.

Tony Cairoli has to get a mention here too. The guy is 35 years old, racing in maybe the most competitive MXGP field in history (there were five world champions from first to fifth at one stage of race two with Cairoli leading a train that combined 20 world titles) and he was two laps away from a second place podium, as the Italian wizard showed what he can still do now he is healthy again!

The man is simply remarkable and to make it even more impressive, this was a track he has struggled on in the past, yet he has managed to improve his weakness on hard-pack even in his mid 30s. His desire to win and to still put in the work despite already being a nine-time world champion added to his ability to still be a contender for wins and podiums is a testament to his natural talent and tenacity. Cairoli is one of the greatest riders of all time, and he keeps proving it year after year, a record-equalling tenth world is still a realistic possibility.

It was also nice to see a track with such rock-hard terrain, it gives those hard-pack specialists like Alessandro Lupino a place to show their skills, and while some don’t like tracks with minimal ruts it’s a skill to find traction and have the imagination to find your own lines. Gajser showed what is possible when you have the skill-set and Lupino showed what you can do even on a non-factory machine if you have the throttle control and feel when it’s slick. The world championship should have every condition to test the rider skills in order to be the best rider in the world, you need to be good everywhere and that Russian circuit certainly tested skills that aren’t usually needed on a lot of tracks on the modern calendar.