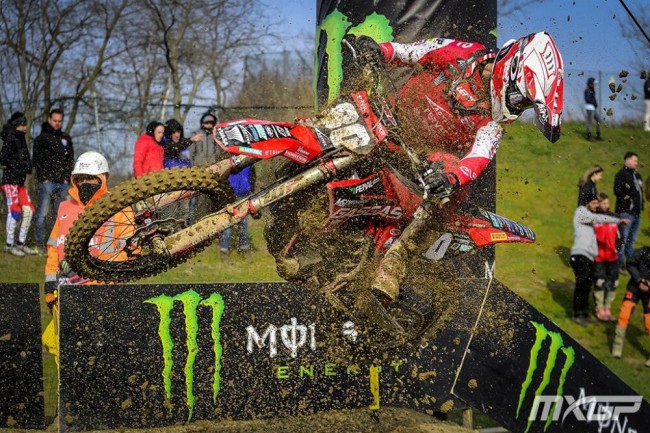 Tim Gajser is the man to beat after two rounds of MXGP and if you can beat him (like Jorge Prado has proven he can) you just can’t afford to get a bad start and still be in with a chance of victory.

Gajser’s starts are on point and if he isn’t winning he is very close to doing so, right now he is in control and he looks like he has more if he needs it.

Jorge Prado however rode really well in the first race and especially those last two laps to get a gap on Gajser was very impressive, he showed once again what he can do and is impervious to pressure from behind – but as we saw in race two he needs the starts. Mantova is not the place to get a bad start and, although Prado did come through well, not finding a way by Olsen and that crash proved costly in the championship. Dirt in his goggles didn’t help in race two and Prado is of course not panicking yet but, the gap is 12 points and Prado can’t let Tim get too far away in the championship, even at this early stage.

Maxime Renaux is close, very close and, once he figures out the last ten minutes at the intensity of Prado and Gajser, he will be a factor for race wins. The hard part is the speed and he already has it. Renaux will be a factor as he gains more experience. First podium – check. Speed -check. Renaux has had a strong first two GPs.

Jeremy Seewer is also close but little mistakes while leading have cost him, almost similar to the early stages of Romain Febvre’s campaign last year. Once Seewer gets a win it might be the calming momentum he needs.

MX2 was captivating. Jago Geerts was outstanding, for me, one of the best performances of his career and this time no mistakes when he had Vialle in front or behind him. Geerts was mentally strong with superb speed and he now leads the series. He looks super focused and ready to deliver in 2022, but of course it’s early yet!

The new blood up front

Simon Laegenfelder proved as more or more this weekend than he did winning th British GP! Coming from a bad starting gate pick after Vialle left him on the deck in the qualifier. The German rode with a sore back to take fourth overall, come through the field in both motos and show pace in race two that was astounding. He was the fastest man on the track at the end as he ran down De Wolf for second and was even catching Geerts. Baring in mind he came from outside the top ten and had a crash, this was a superb performance and shows the mentality and confidence Laegenfelder currently has. He has been a revelation in the last two rounds and surely has to be seen as a title contender now.

Andrea Adamo, take a bow! What a magnificent performance from the Italian who led his home GP and got on the podium after that last lap clash with Geerts and De Wolf. Adamo deserved to get on the box and the joy and admission it was the best day of his life was fantastic to watch. Like Laengenfelder, Adamo has done something special over the winter, and he isn’t in a factory team. All round he is just very, very impressive this year. You can get more on Adamo in Andy McKinstry’s article here.

Tom Vialle is lucky he is still on contention for the title after his jaw-dropping crash! Vialle has made more mistakes than usual this year (new bike and late prep a factor?) but thankfully he is unhurt after his huge summersault and lives to fight another day 26 points down and the title still possible. But he has to hunt down some big young talents in De Wolf, Laegenfelder and Geerts and he has a fight on his hands to win his second 250 title before he goes 450 (currently planned) next year.

The stage is set, the MX2 two championship battle is wide open and it is a class you just can’t take your eyes off right now.

Podcast! Jonathan McCready and Andy McKinstry talk about the MXGP at Mantova, some amazing MX2 performances plus should Herlings race the US nationals? The Ken Roczen situation and that Stewart/ Anderson clash. Available on all major podcast platforms. Get it on iTunes here or Spotify and You Tube below: