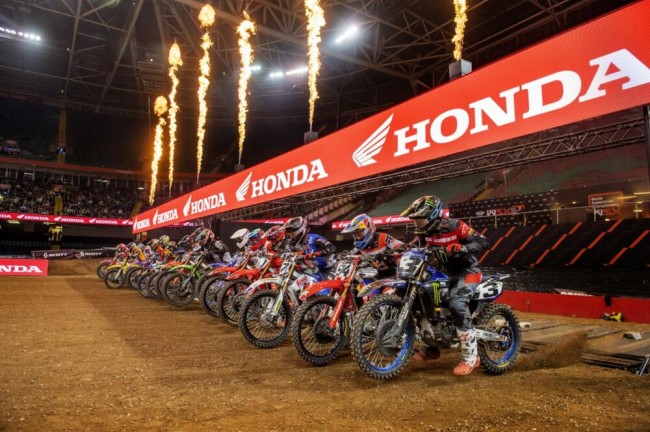 What an event. After the expectations, as well as the negative vibes from some quarters and the conflict with certain aspects of the US industry the first ever WSX was a resounding success.

35,000 fans attended the home of Welsh rugby at the Principality Stadium in Cardiff and saw two of the best supercross riders in the world, Ken Roczen and Eli Tomac go, at it. They also saw home hero, Max Anstie, win his heat race and one of the main events in a stacked 250 class full of quality names.

As first attempts go, it couldn’t have went much better and it showed the hunger fans outside the US have to see the top supercross riders in real life after spending every winter watching them on TV in AMA action.

That was underlined by the fact Roczen, Tomac and Reed got cheers as loud as home riders Anstie and Wilson. Fans want to see the best and Cardiff provided that. Tomac and Roczen, to their credit, did interview after interview doing their part with the media to showcase the event and show the fans their appreciation for the support they gave. Every rider seemed to enjoy the event and appreciate seeing a new part of the world that the sport of supercross can clearly thrive in.

When Grant, Reed and Wilson went down the crowd cheered them as they got back to their feet as well, something that I’m sure didn’t go unnoticed by each rider despite the pain.

The three main events back-to-back were fantastic was a spectacter and media perspective Less waiting around and plenty of action during each race even on a track that was hard to pass meant there were no runaways, even when Tomac took the lead in the 12 lap superfinal. It worked and the fans get to see the top riders four times when you include the initial heat race at the start of the programme.

The commentators both at the stadium and in the TV didn’t quite understand the format completely with it being announced in the stadium that the first race of the night was the 250 3 back-to-back main events when in actual fact it was the 250 heat races. But those are just small issues understandable in a new event that had such hype and pressure to have to deliver to set the precedent.

Personally, I preferred the 3 main event format to the US AMA version but whether something so intense and bar-banging could be realistically replicated over 17 rounds week after week is questionable. But for WSX it is a unique selling point and provides a great show – maybe they could even be a lap longer, especially in the 250 class.

Credit needs to go to Adam Bailey and SX global, there was a short turnaround to get this event on and showcase WSX in preparation for a full scale series in 2023, but it was certainly a success and the rider line-up was impressive for a fledgling new series.

Next year with a deeper 450 field the racing will be even better.

The biggest negative was the injuries to Chad Reed and Josh Grant, two fan favourites and it was great to see them back in action with a competitive pace. They both crashed in the exact same section due to separate bike issues, so it wasn’t being a retired rider that caused it, Grant still makes things looks to easy and Reed still had the style and the speed to be competitive. Hopefully they will be back next year.

Luke Clout was really impressive with his lap times all weekend despite only being back on the bike after 6 months but he also crashed hard in the same section, fortunately with no lasting damage, but US teams should take a look at that guy, he was class.

Josh Hill and the Ken Roczen blew minds with their quad jump in the night show and even the freestyle, which I’m not a fan of, was enough to satisfy fans who enjoy it without taking away from the racing which was the priority. The night flew in and there wasn’t much waiting around and any fans I spoke to after and media really enjoyed the event.