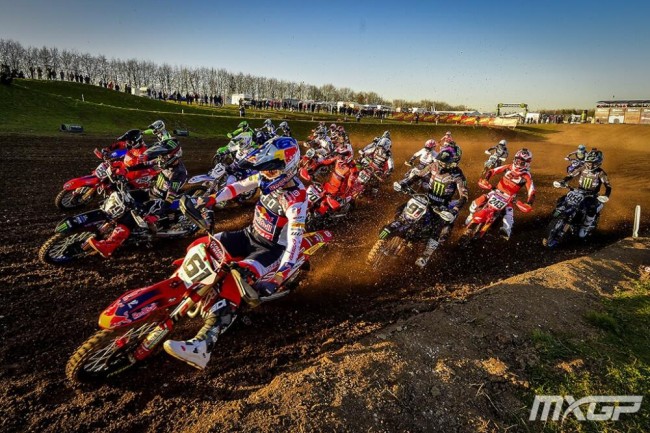 It was a week late but it was worth the wait as the the MXGP World Championship started with a bang at Matterley Basin!

Brilliant racing in every class, carnage in EMX125, a new star in MX2 and two world champs dicing in MXGP for the moto two win to end a memorable opener in style.

But let’s start with that man Laengenfelder, wow, what a performance! Fast, fit and classy, the German made good on his potential to show what he could really do when that potential is aligned with fitness, experience and a brilliant factory team. Laengenfelder was superb, dominating race one and showing mental strength to win race two against Vialle and Geerts.

Vialle and Geerts will be satisfied with their podiums with both not quite at their peak just yet. De Wolf and Van de Moosdijk also had sold starts but Horgmo, Rubini and Haarup showed brilliant speed as well on their new teams.

In MXGP Tim Gajser showed he was the fastest but mistake in race two gave Prado a big win after the Spanish star said he felt, “rusty” in race one going from first to fourth. But with that win he was very happy with his start to the season even if he did acknowledge Tim had more speed. Prado will get better from here but with Gajser’s form right now, he’s set the bar everyone else has to match. To come past your rivals in both motos was mighty impressive.

But the Yamaha’s are all knocking on the door this year! Seewer coulda, woulda, shoulda won race one, crashing with two laps to go under pressure from that man Gajser.

Glenn Coldenhoff overcame a difficult first moto to take a third in race two to show his potential.

Maxime Renaux is exciting to watch! He took a fantastic race win in the qualifier to underline that he is the real deal on a 450 only for crash after bad start in race two limiting his results but speed was there every time out. He was fantastic all weekend and certainly a potential race winner.

His fellow MX2 graduates were also impressive, Jed Beaton rode superb to take sixth and looked so at home on the bigger bike compared to the 250 as Ruben Fernandez again showed great speed to run on the edge of the elite with all three rookies beating last year’s MXGP rookies, Olsen and Watson, although Watson was riding banged up from a crash in practice. But it is very evident the intensity and maybe confidence brought in by Beaton, Renaux and Fernandez have added a lot to MXGP this year.

Alberto Forato was also impressive, actually getting good starts for once and then really showing the pace he had. Forato could be a spoiler this year, he’s young, fast that ride should give him a lot of confidence.

The two-day format is miles better than the one-day format with every class on show both days also leading to a rougher track and more entertainment for the fans. Steve Dixon deserves a lot of credit for running a great event on one of the best tracks on the calendar.

After all the hassle, the British GP was worth it and one to remember.

Podcast: Jonathan McCready and Andy McKinstry review a brilliant British MXGP that kicked off the 2022 MXGP world championship in style – it had everything!

Listen here on iTunes or on Spotify or You Tube below: