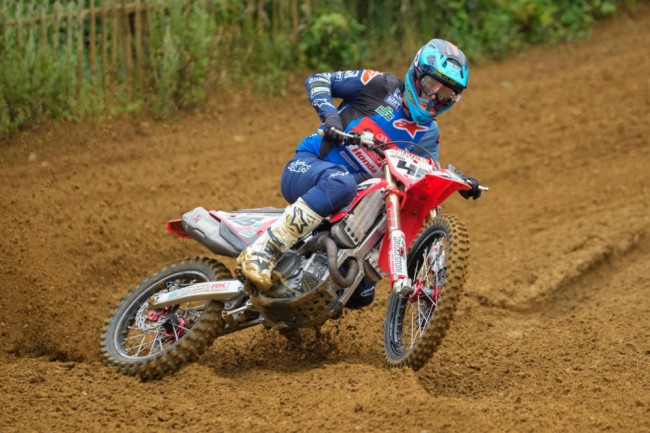 The final round of the Michelin MX Nationals powered by Milwaukee brings the championship to it’s conclusion this weekend at the all new Oxford Moto Parc venue. With many of the ever increasingly popular British championship classes yet to be decided and a brand new circuit designed and built by Alfie Smith, with help from fellow top U.K track builders Justin Barclay and Johnny Douglas Hamilton it’s fair to say there’s a lot of excitement about the final round from riders and fans alike.

With the Leatt MX1 Elite championship gold plate already in the hands of Cab Screens Crescent Yamaha’s Harri Kullas, most eyes will turn to the battle for the Apico MX2 Elite title chase where there will definitely be a new champion. Jamie Carpenter (GRT Impact KTM) went into the penultimate round at Hawkstone Park 17 points behind Tom Grimshaw (Chambers Racing Team) but came away 10 points in front and now has the target on his back, so no doubt Tom will be throwing everything he has at Jamie to get back in front by the time of the final flag drop of the championship. Calum Mitchell isn’t out of the title hunt either, only 27 points off the lead, although realistically it’s a big ask and he’ll be hoping for some serious bad luck to fall on Carpenter and Grimshaw. Apico Factory Racing Husqvarna’s Jamie Law is a further 10 points back and will be keeping the pressure on Calum, while Carlton Husband (Phoenix Tools / Even Strokes Kawasaki), who took his maiden MX Nationals race win last time out will want to keep that trend going. Getting in the mix to spice it up further will be Dylan Walsh (Revo Seven Kawasaki) and he’ll sure as hell put on a show on the new circuit with some pretty tasty jumps for him to scrub and whip. Bobby Bruce (ASA United Gas Gas) will also be making his first appearance of the championship in 2023 following his knee surgery.

Just because Harri Kullas has already won the title don’t expect him to take his right hand off the gas. He’ll want to sign the series off in style and certainly try and get a physiological edge over Tommy Searle (Crendon Fastrack Hitachi Honda) as they continue to fight it out elsewhere. Searle missed Hawkstone due to illness but will up for the fight at the final round. So too will Josh Gilbert (SC Sportshomes / Stebbings Car Superstore Husqvarna) who has been showing some serious form racing the last three AMA US Nationals, so much so that some fans have been asking the question why he isn’t joining Tommy on Team GB for the MX of Nations at Red Bud. Another rider who was in the running to be on Team GB, Conrad Mewse (Stebbings Car Superstore KTM), will want to prove a point and show that he will be a real championship threat in MX1 for 2023. Martin Barr (Apico Factory Racing Husqvarna) sits third in the championship, even though he’s been fighting a mystery illness for a large chunk of the year. Brad Todd (Gabriel KTM) has put together a strong championship run and will want to try and pip Martin at the post as he’s only four points behind. Jon Adamson (ASA United Gas Gas) has been getting faster and faster as the year draws to a close and will be swashbuckling as usual in his attempts to win. The final round should also the return of Evgeny Bobryshev (SC Sportshomes / Stebbings Car Superstore Husqvarna) after being sidelined due to world political reasons. Jake Nicholls will also take to the line!

If all that isn’t enough there’s the Syntol Lubricants 85cc Open, Seven Youth 125/250, Moto Connection Clubman MX2, Worx Sports Insurance MX1, Motoverde Amateur MX2/MX1 and RFX Expert MX2/MX1 classes going at it over the two days providing awesome race action as always. The Elite pro riders will be in action on Sunday. You can catch all of the final day of racing of the 2022 Michelin MX Nationals powered by Milwaukee exclusively live and free to view on MXN-TV’s YouTube and Facebook channels from 9.30am on Sunday.

Spectator tickets are £20 and cover both days, while camping per vehicle costs £10. For more information go to MX Nationals Facebook and Instagram pages. Oxford Moto Parc is situated just west of Abingdon, Oxford and will be signposted off the A34 / A415 Abingdon junction.