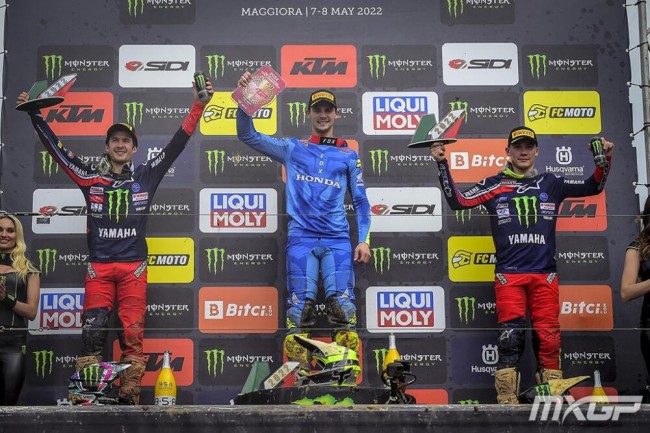 Tim Gajser: “Yeah, it was a good weekend, I was really enjoying those days. It was completely different, we had rain during the night so it was completely different and more technical let’s say. It was a good day and also good starts, then I took the time to find some nice lines to pass the guys in front of me, then could make a comfortable lead and then control the race. I really enjoyed the race and look forward to next weekend”.

Jeremy Seewer: “It took me way too long to be back on the podium which wasn’t in a very good form in the beginning of the season. You know, many things came in between. The crash in Argentina was a big setback and it took me a lot longer than I expected just to find my form again. And even now, I mean, I’ve done a good weekend, but I still feel like I can improve a lot. I’m not yet back to where I should be but there’s still a lot of racing left, we are very happy to be back on the box. And now I think I can still go step by step and improve and try, you know, to battle with Tim, because he’s on a very good level”.

Maxime Renaux: “It was a really consistent day. There’s one thing I’m really happy about this weekend is that we made a big step on the on the starts, I got three good starts, in the qualifying and both races, so that was a really good thing. Then I messed up between the first and second and second and third corner and went back to fifth and yeah, I was just not happy and satisfied about my riding in the second race. I know I can do much better and I know inside of me I still have so much left so we will try to figure it out and work hard coming into Riola Sardo next weekend”.