Plessinger, Stewart and Ferrandis on Daytona 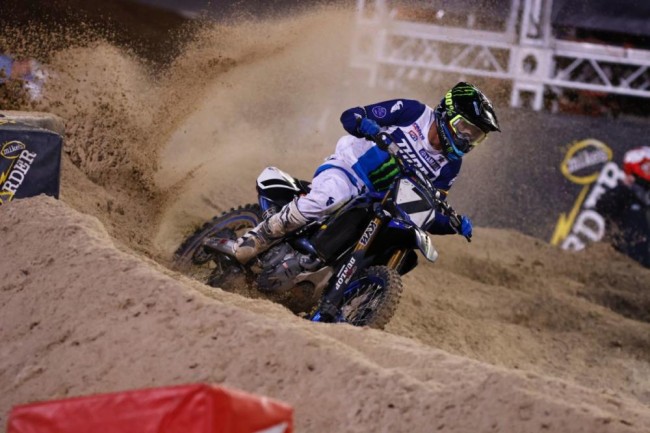 Monster Energy Star Yamaha Racing’s Aaron Plessinger got the podium finish he was looking for, putting in a great ride Saturday night to finish third at the 51st annual Daytona Supercross. Malcolm Stewart completed his home state tour in Daytona Beach, Florida, with a top-five finish, his best result to date at the iconic Daytona International Speedway. Their rookie teammate Dylan Ferrandis crashed early in the race but worked his way back to 11th.

Daytona Supercross is known for being the longest and most demanding tracks on the schedule, and this year was no exception. With his off-road background in the GNCC series, it’s the kind of conditions that Plessinger looks forward to, and it showed as he earned his best qualifying result so far this season in eighth and then followed it up with a strong runner-up performance in his heat race. In the Main Event, Plessinger got off to another great start in third and then made his move for second on Lap 3. He exchanged positions with the competition and ultimately came out on top. The 2018 250SX West Champion then threw down some fast laps and was sitting comfortably in second for most of the race. In the final laps, the competition closed back in but Plessinger kept focus, keeping it on two wheels and securing a podium position, crossing the line third for a career-best finish.

Stewart also got off to a good start on a track he typically struggles on, qualifying ninth and finishing second in his heat race. After the gate drop, the Florida rider was in sixth and battled for position. He moved into the top five before the halfway mark and advanced to fourth four laps later. Stewart kept pushing but ultimately was passed by the series’ points leader in the final laps and crossed the line fifth to move into the top-five in the championship standings.

Ferrandis showed speed straight away, qualifying second. In his heat race, the Frenchman did not get the start he was aiming for and had to work his way from 11th to fifth. Unfortunately, he found himself back in 11th again after the start of the Main Event. Ferrandis was looking to repeat his charge through the pack, but on Lap 3 he went down in the exit of the sand section. He rejoined in 15th and fought his way back to salvage some points in 11th.

Jeremy Coker (team manager): “Tonight is proof that all of my guys’ hard work over the last two weeks has paid off. My riders have been training hard, and we’ve all worked together to get somewhere. I think tonight really shows that we’ve done it. Aaron was incredible all day, really, and then he rode great in both races to show that he could do it. The most important part, like I’ve been saying every week, is that our starts have got to be better, and finally our starts were better. If you start up front, it’s a lot easier to finish up there. All three of my guys were riding really well. We are going to keep working hard and keep working to stay where we belong, fighting for podiums.”

Aaron Plessinger: “This is definitely a monkey off my back, for sure. Going back to Daytona two years ago, I was lying in the emergency room with a shattered heel and not too sure what was going to happen after that, so to come here and rebound like I just did, it’s crazy. I’m speechless. I felt like I had more to give on the last couple of laps, but a podium is a podium and I’ll take what I can get. I feel like it’s going to come a little bit easier now.

“The track was so gnarly, with the black sand and then beach sand and all the ruts. Some of the transitions of the jumps had such big kickers on them. It was crazy. It was a long race, but we ended up on the podium, and that’s all I can ask for right now. I just want to give a shout-out to these guys for working their butts off and believing in me. We’re going to keep going.”

Malcolm Sewart: “Daytona is one of the tracks I struggle on, so to get a top-five tonight was a good deal. The fact that I rode really well and made it happen is a big confidence booster, especially since we’ve got three more races in Atlanta that are kind of similar to this. I just want to give a shout-out to my teammate, Aaron Plessinger, who got a podium. That was a good one for him. Also, we got two Yamahas in the top five tonight. I think that’s a good stepping stone for us. We’re just going to keep digging, keep having fun, and enjoying the moment. We’ve made a few mistakes, but we’re sitting fifth overall in points. The podium’s coming. We’re getting closer and closer.”

Dylan Ferrandis: “I felt good during practice today in Daytona. I had a good start in the Main Event, but I got tangled up in the first turn, and then I had a small crash in the sand. It was another frustrating night for me. We’ll go back to work again for a better result in Arlington.”