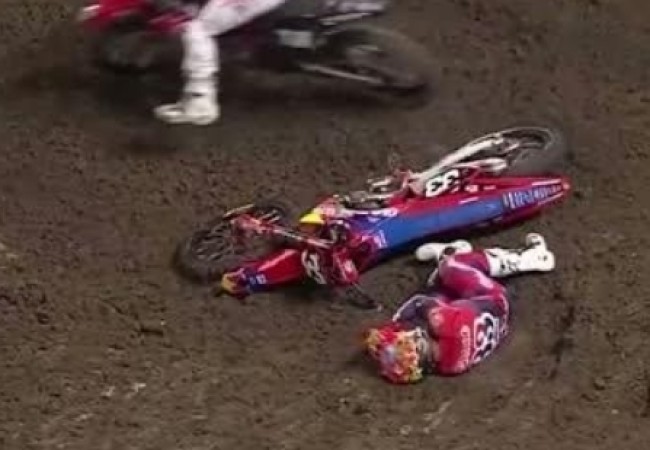 After looking great all day and ready to be challenge for the podium, Pierce Brown went down hard hard only seconds into the heat race, landing on his heand and putting him out for the night.

His team have released an update saying:

Pierce Brown started off the day on the gas, qualifying in the third position. But a hard crash in his heat race proved to be the end of his evening. After being seen by the Alpinestars Mobile Medical crew, he was transported to a local hospital for further evaluation. The good news is that he’s already been released, and is headed home.

Meanwhile Justin Barcia, who had been anonymous all day, sprung into action with a holeshot until he veered right and off the track, ending his hopes of a podium, eventually finishing 11th.

Barcia commented: “A1 is a wrap. The day started off pretty well. I felt good in the first practice but I struggled a little bit in the next two, just with feeling comfortable with the track, because it was very tricky with a lot of square edges and things like that. I made a big change before the heat race and unfortunately went in the wrong direction. So I went back to my base setting for the main event. Pretty much ripped the holeshot, led a few laps, made a huge mistake, and had a crash. I worked my way back up to like seventh and had another crash. So it was a difficult main event. We’ll take a few positives from the day. We had a good start, and we had speed, we just need to keep it on two wheels and keep it simple and we’ll be good. But the speed is there, the fitness is there, and the bike’s there, so I’m happy with that and definitely put this result behind us and move forward.”