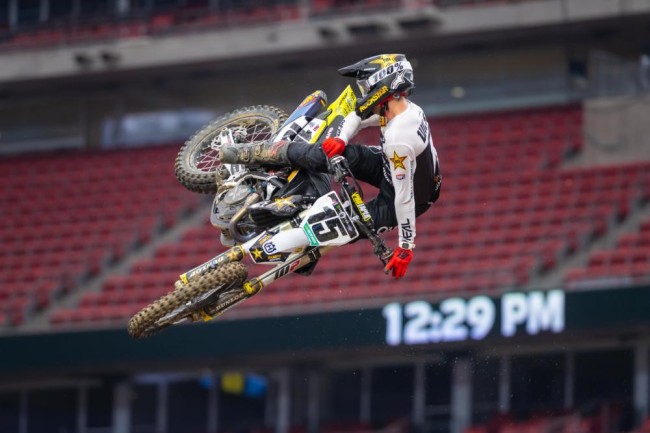 Mickael Pichon is not happy with Dean Wilson’s part in Ken Roczen losing the win at Houston 3 – and he doesn’t believe Wilson didn’t know he was there!

The former two-time world champ and two-time 125 supercross champion vented: “Last week Ken Roczen was stripped of 4 points because he jumped under “the flag with The Red Cross” when there was “only one” posted on the outside of the sand curve. He himself says he did not see him for valid reasons. He was inside in that sandy part. Ferrandis on his outside hid the flag from him. And above all they were in-fighting, so head in the handlebars and focus, so it had some extenuating circumstances.

“Dean Wilson will have just had him 4 or 5 blue flags minimum for almost 2 full laps🥸🥸🥸🥸, sight problem surely….. So here we have a Wilson who sells me a dream by saying “I didn’t know the leaders were behind me 🤔🤔😂”. no but the guy he can take a lot of people for jerks if he wants but when you’re a former pilot it makes you laugh …. because during the race you always throw many glances behind (easy in big jumps, triple, finish, straight start etc…) to see who follows, check the gaps etc. … besides all the drivers taking a lap just before him all pushed themselves directly, without exception. We will add to this that Kenny would have shouted at him many times (the words of Roczen on the podium), which we all do when we put a ride to the latecomers …. deaf in addition Dean Wilson ?? That’s a lot, blind and deaf for 2 full laps on the same race.

“In short, the guy ruins a well-deserved victory of Roczen has 1/2 lap of the finish😤😤Obviously he will have no point withdrawn for not respecting the blue flag, and people will also say “Wilson is still a good guy, he made a long apology to Roczen on the networks” pff … bof, it’s too easy … Roczen has just lost 7 points that he would have deserved in these last 2 races.
Not terrible all this on the sporting side for the most beautiful MX championship (SX) on the planet😒😒🤷 ♂️Go Kenny next weekend 💪💪👍”