Nichols and Craig on Orlando 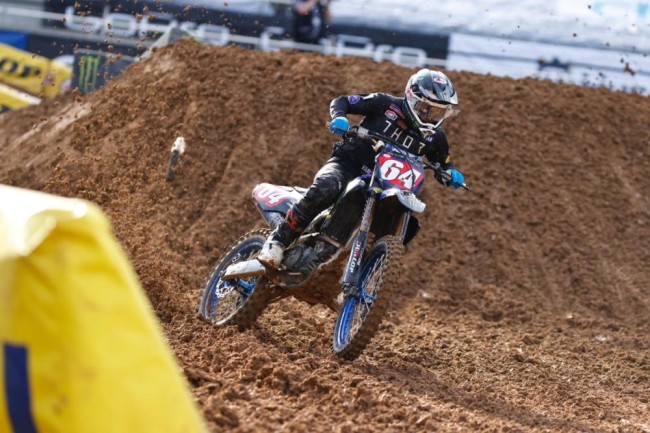 Monster Energy Star Yamaha Racing’s Colt Nichols finished second Saturday night to extend his points lead in the Monster Energy AMA Supercross 250SX East Championship at the final round before their extended break in Orlando, Florida. Christian Craig put forth an inspired effort, winning the LCQ after crashing out of his heat race and ending the night third to secure the team’s sixth double podium in seven races.

The 250SX East duo showed strength straight away at the Camping World Stadium, with Craig taking the fastest qualifier honors and his teammate right behind in second. When it came time to race, Nichols fired the first shot with a dominant win in his heat race. Craig looked to follow suit in the second heat but unfortunately had a big crash on the second lap that took him out of the race. Although not feeling 100%, the Californian went out and won the LCQ.

In the Main Event, the pair both got a good start, with Nichols in second and Craig moving into third. They ran a good pace and maintained their positions throughout the race. With less than two minutes to go, the Oklahoman made one last push to get within striking distance of the leader but ultimately had to settle for second. Although he wanted to leave Orlando with a win, the runner-up finish expanded Nichols’ points lead to eight. Behind him, Craig toughed it out for the 15-minute-plus-one-lap race to cross the line in a solid third-place finish. After seven races in five weeks, the pair get a break before the season finale in Salt Lake City on May 1.

Wil Hahn: “We left a little bit on the track in the Main Event with Colt. I think he’s a little disappointed, but it was still a good result, and he left with a bigger points lead. That’s always the goal. For Christian, to rebound after that heat race crash and win the LCQ and show that much heart in the Main Event, that’s a pretty big breakthrough. That’s huge for him. It’s got to feel good going into this break knowing that he’s still only eight points out of the championship lead. All in all, it was a positive night.”

Colt Nichols: “I was just a touch off of Christian all day in practice. I was able to get the heat race win, which was nice. I got to line up where I wanted on the gate. I just didn’t quite execute the start as well as I wanted to. Jett (Lawrence) got ahead of me and was able to control the inside. So that was kind of the race right there. The track was a little difficult to pass on, and it was so slick. The moisture started to come up, and it got slicker and slicker as the night went on. So that made it tough. But overall, I can’t complain. I got some points in second place, and that’s always a good thing. I just was a little bummed about my riding. I felt really flat at the beginning of the race. I didn’t have much intensity there, so that’s why I was a little frustrated. We’ve got a long break now, so I’m going to try to enjoy things and get some outdoor riding and come back swinging in a few months.”

Christian Craig: “The weekend started off great. I qualified first. I loved this track, everything about it. The dirt was hard-packed, just like the test track, so I was feeling so good. I got off to a good start in the heat race, and then on the second lap, some sort of little case turned into a big fall. I’m sure everyone has seen it on TV. I banged up my hand pretty good. I wasn’t sure I was even going to race, but we had it taped up by Dr. G. and had to grit it out. I knew I had to do what I could to get through tonight. We have 10 weeks after this, so I can heal up then. I was able to get out to a good start from way on the outside in the Main. I got into third quick and stayed with Colt for a lot of the race. Then I had some sketchy moments, so I backed it off and finished third. I only lost two points to Colt. After the Heat race, if you would have told me I’d get third, I would have been jumping up and down. It was a win in my books after that crash. We’ve got a long break, so we’re going to heal up and get ready for Salt Lake.”