MXGP considering double or triple headers later in the year 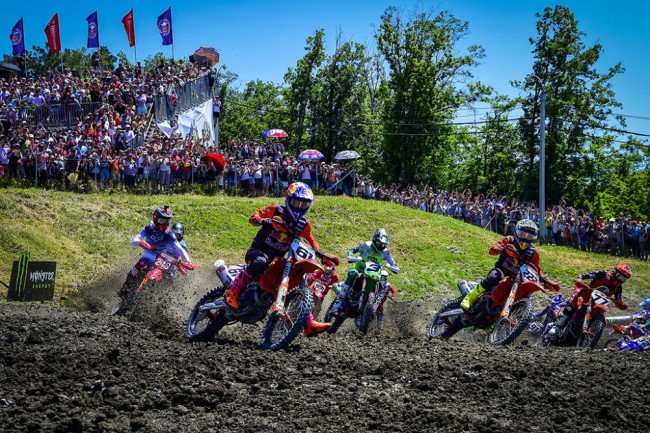 The next twelve races of 2021 MXGP will venture around Europe and will reach a total of fifteen rounds before the scheduled flyaways to Argentina on November 14th and an Indonesian back-to-back on November 28th and December 5th that will complete the target of eighteen events for this year’s world championship. Due to the surge of the delta variant Infront Motor Racing are already considering how the calendar will alter if the trips outside of Europe become difficult to realise. MotoGP have already cancelled the Australian Grand Prix at Phillip Island for the second year in a row in favour of another race at the Algarve international Circuit in Portimao, Portugal.

MXGP ended a condensed 2020 campaign with six races at just two circuits and Infront will contemplate a similar strategy if the dates at Neuquen, Borobudur and Bali cannot go ahead.

“This is the idea but for sure it is still too early to say if we can go or not,” CEO David Luongo admitted. “The target is to go because we have a contract, and we have the will of the organiser and the government to travel. It is a world championship so we have to do what we can to make those three events but, like last year, if we see it is impossible then we will have to adapt the championship. The idea is to multiply – do double or triple events – at the end of the season to make a series between 18-20 races like we did in 2020. Hopefully in 2022 with more vaccines and the green passport we can make a more normal calendar and normal GP format.”

MXGP has already been delayed twice in 2021, is running a safety protocol for the paddock, seeing limited public attendances and is structured with a one-day timetable for the MXGP and MX2 classes.

There are already rumours that the Grand Prix of Turkey on September 5th could stage a second race on the 12th and final European date at Pietramurata, Arco di Trento in Italy on October 31st could be extended to two or possibly three GP fixtures to close the series. “It could be Arco because it’s the last European event and we’ll be there anyway, like this it would be the easiest for logistics,” Luongo affirmed.