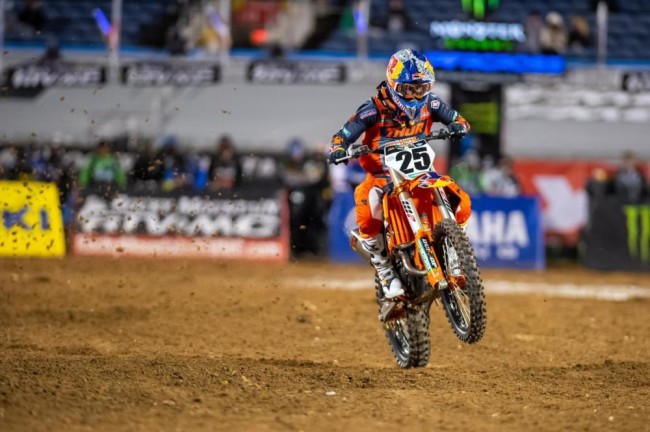 Marvin Musquin spoke to the media after his second place finish in Orlando two and revealed that he, unlike Cooper Webb, is still using the air shock!

Marvin, just take me through. You’ve had so many problems on the first laps of these races. A much better start, I know there was a little chaos on the first lap of this one, but what is the sensation like when you finally do get a good start when there have been so many races where it’s been a problem?

It’s a great feeling. I had a great start in the heat race, and I was leading, so that was awesome. When you have no one in front of you, you can pick your lines and focus on yourself. So that’s a great feeling. In the main I had a great start too. AC got me on the corner, and I had to back it off a little bit, and that’s how I lost a little bit of ground. Then it was better, then I got to third place. The two guys up front had a little bit of a gap, so I was a little bit on my own. It’s good. It’s good to be on the clean spot and have room. Then you can focus on yourself and do your riding. The heat and then the main was actually pretty good.

With this under your belt now, is this something you can build off of, now that you’ve got time up front and you know where you stand? You were pretty close actually to Cooper for a while. So, is that a big confidence booster now?

Yeah, it is. I’m super happy that we tested this week. I just had a different set-up today. Obviously, it showed. I showed better riding, to be in that position and to gain a little bit of ground on Cooper there. I started slowing down in the whoops. It was very, very sketchy. Super easy to make mistakes. I backed it off a little bit and that’s where I couldn’t make up any more ground on Cooper. I felt quick. I was telling the team, Frankie (Latham, mechanic), and Mathilde, my wife—I said, I had good feeling and fun, not everywhere on the track. I had fun and pleasure on the tough track, so that means a lot. That means that the feeling was good, and the bike was better. So, I’m happy with that.

You were out for quite a while, and that first round podium you actually looked kind of surprised that you ended up on the podium. Now you’ve gotten two more. We’re eight rounds in. How would you rate where you are right now in your season, how you’re feeling out there, and just overall how is your season going?

To get the very first podium at Houston, it definitely surprised me. Coming back from missing a whole season, a whole year, it was tough. But I was glad to be back close to my full potential and building from there. After that, it wasn’t the way I wanted to. Then I got another podium at Indy 3, but now I feel like I’m in a better position because on a tough track like today I was able to ride good. So that proves that the feeling with the bike is better. Hopefully, we just keep on getting better and go from there.

Obviously, this year has been tough, but it’s a comeback, I feel like, from my knee injury. I wasn’t even sure when I had my first day riding supercross if the knee and the leg would have been okay. Riding outdoors is one thing, but supercross is different. But I work hard, and the feeling is back, so I’m excited for the future.

Today just looked so much better on the motorcycle. Was it a simple change of there were just changes made during the day, during practice? Or was it just the simple fact that tonight was a good start and you got to run the pace up front?

For sure, the settings that we had today helped me. I’m really happy that we got to try something this week with the WP guys and the team. They came up with the ideas and new parts for the air shock and a little tweaking of the forks as well. It was a decent combination for me to feel more comfortable and to be more happy and obviously confident.

Practice went pretty good. Everybody knows that lap times are, for one lap of qualifying everybody is very fast. So, you can’t really judge on that, but if you ride in the window at the top five or six, seven, it’s good. Then moving into the heat race, I had a great start and running up front helped obviously, but definitely the bike set-up helped me for this weekend. So, we definitely had basically the same track as last weekend, and I feel better each week and have more confidence on the bike. So, it was a good test for me and for us as a team.