Meara and Husband on Culham 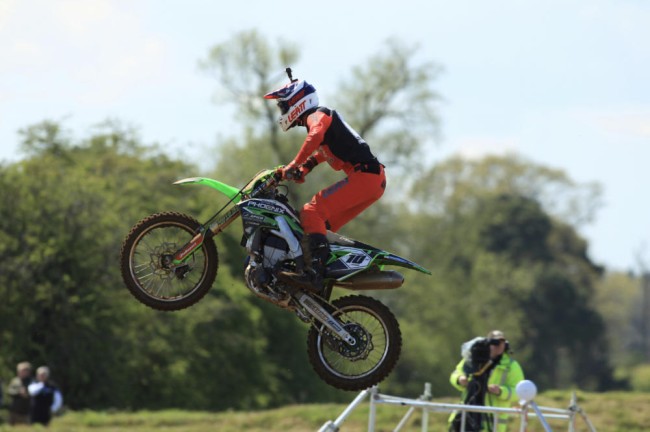 Culham marked the opening round of the Revo ACU British Motocross Championship fuelled by Gulf Race Fuels for the Phoenix Tools Apico Kawasaki team. After the championship was not contested in 2020 due to Covid-19, the team were keen to get back racing and start the year with some strong results.

In the qualifying session Carlton Husband posted a really strong lap time which saw him finish 10th fastest in the MX2 class. In the MX1 class Jason Meara also had a strong qualifying to finish 12th fastest. Going into the races both riders were feeling good and looking for strong finishes.

In the opening MX2 race Carlton made a great start but unfortunately the race was stopped on the opening laps due to an injured rider. In the restart Carlton made another good start and was inside the top 3 and rode a superb race battling at the sharp end of the field finishing in a strong 7th place.

The second moto would see drama on the start straight when Carlton was involved in a heavy crash as the gate dropped. With his bike twisted and front brake and clutch lever damaged, Carlton showed his determination and remounted and pushed hard all moto long to claim 15th at the flag and 9th overall.

In the MX1 class Jason was riding well in the early stages of the opening moto until he crashed awkwardly in a slow corner and hurt his shoulder and was forced to retire from the race. With a loss of strength in his arm Jason and the team decided it was best to sit out the second moto.

Also competing over the weekend was the team’s youth rider Sam Atkinson in the MXY2 class. Sam has a great qualifying session and took pole position by over a second and was looking good going into the races. Unfortunately, Sam had a big crash in the opening race and had to ride through the pain to finish 8th. Feeling battered and bruised Sam claimed 5th in the second moto before taking a pair of 3rd place finishes in races three and four.

Barry Moore – Team Owner
We had some good positives to take away from Culham this weekend. I am really pleased for Carlton in the MX2 class, he had a great qualifying and a strong 7th in race 1. Carlton was wiped out in race 2 but picked up his bike and showed great character to come from last to 15th with no front brake and clutch lever for 9th overall. Carlton has shown that he definitely has the speed to be at the sharp end of this class.

In the MX1 class Jason had a strong qualifying session and was going into race 1 feeling confident, unfortunately Jason crashed hard onto his shoulder and had to retire from the race. We decided it was best Jason did not go out in race 2 as he lost the strength in his arm and he returns home to prepare for round 2.

Young Sam in the MXY2 class had a fantastic qualifying taking pole by over a second, Sam crashed heavy in race 1 and gritted his teeth to take 8th at the flag. Battered and bruised he dug deep and took 5th in race 2 followed by two 3rds in races three and four.

Carlton Husband – MX2
It’s been a really good day, I think most people came here a bit race rusty but I felt good all day. In the first race I got a good start, but it got Red Flagged and then in the restart I got another good start and was running in the top 3 and then dropped back to 7th at the flag but I was happy with that. Going into the second race I felt more comfortable, but someone came across me on the start and I went down hard, and it wrecked my bike, so I rode the whole race with no front brake and bent bars, but I scored a 15th so I’m happy and we have come away inside the top 10 and I’m looking forward to the next round.

Jason Meara – MX1
It has not been a great day for me, as I have ended the day with a sore shoulder but there were some positives to take that my speed was good in qualifying. In the race I got a bad start, but my speed was good, and I was pushing forward when I crashed on a slow part of the track and hurt my shoulder, but I hope to be back at the next round and go again.

Sam Atkinson – MXY2
Qualifying was good as I took pole by over a second and then in the first race, I got into second and had massive crash on the step down but got going again only to crash once again. I hurt my wrist in the two crashes, so it has held me back for the rest of the weekend, but I managed to get through it with a 5th and two 3rd places so I’m happy to secure those results.