McAdoo on a tough night and getting docked by the AMA 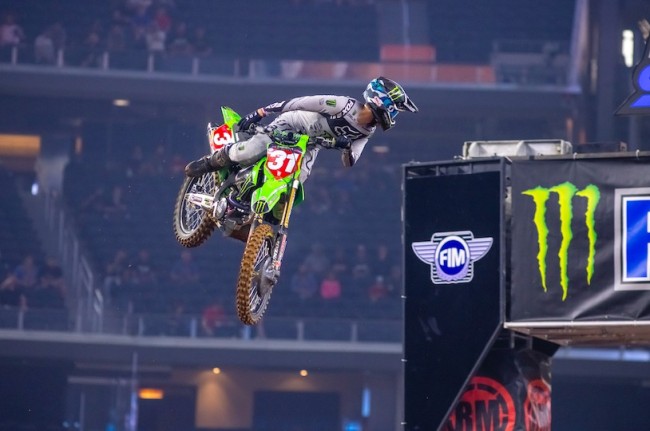 The Monster Energy/Pro Circuit/Kawasaki trio of Hammaker, McAdoo, and Smith picked up where they left off from the first race in Arlington this past Saturday as they once again placed their KX™250 machines near the top of the time charts as they qualified second, third, and 11th respectively heading into the night show.

As the gate dropped on 250SX Heat 1, it was the rookie Hammaker, who once again grabbed the holeshot and never looked back as he grabbed his second 250SX heat race win of his career. The duo of McAdoo and Smith lined up for the second 250SX heat race of the night, where McAdoo was able to capitalize on a bobble from his nearest championship rival and move himself into the lead by the end of Lap 2 and hold on to win the heat. Meanwhile the No. 80 machine of Smith had his work cut out for him as he was able to race his way up into fifth place position.

The Kawasaki teammates found themselves towards the middle of the pack in the opening laps of the 250SX Main Event. Current championship points leader, McAdoo quickly worked his way up through the field and by Lap 6 was hot on the heels of the top-3 and looking to make a pass in the whoops, but unfortunately a mistake sent him to the ground. McAdoo would quickly remount and finish in seventh place, however, after the race, officials penalized him three positions for his reentry onto the track after his crash resulting in a 10th place finish. For the young rookie sensation Hammaker, he too found himself on a rollercoaster after a few minor tip overs, but he was able to remount to finish in 11th place. It was Smith who led the charge for the team with his consistency lap after lap as he brought home his KX250 in seventh place.

Cameron McAdoo: “Today was one of those days that you just want to move on from. I felt really good all day. I qualified in third and won my heat race. In the main event, I had a decent jump out of the gate and was about eighth off of the start, and by Lap 6 I was right behind the front three guys, but when I entered into the whoops, I caught an edge and it took me down. I got up as soon as I could and charged back up to seventh. They say you win championships on your bad days and, unfortunately, the AMA docked us positions, but we have to focus on what’s ahead of us and not behind us now and focus on getting that red plate back.”

Seth Hammaker: “It was a pretty good day overall for me. I was able to qualify in second during the day and then in the first heat race of the night, I was able to pull the holeshot and get another heat race win under my belt which felt really good. In the main, I didn’t get the best jump out of the gate which didn’t put me in the best position and resulted in me crashing as I was trying to pass guys to get to the lead group. I got back up and started clicking guys off but made another mistake and ultimately had to settle for 11th. Tonight was a bit of a learning lesson for me, but the good news is that we are healthy and ready to fight another day.”

Jordon Smith: “Tonight was a step in the right direction. This entire season has been a bit of an uphill battle for me as I have had to fight through injury after injury. While I truly believe we are capable of much more than seventh place position, I think we did a lot of things right today and have a solid foundation to build on. I will spend the next few days giving my body more time to rest and studying race film with the team to see where we can improve upon for Saturday’s race. I can’t thank the entire Monster Energy/Pro Circuit/Kawasaki team enough for sticking behind me and giving me the tools to succeed each time we lineup.”