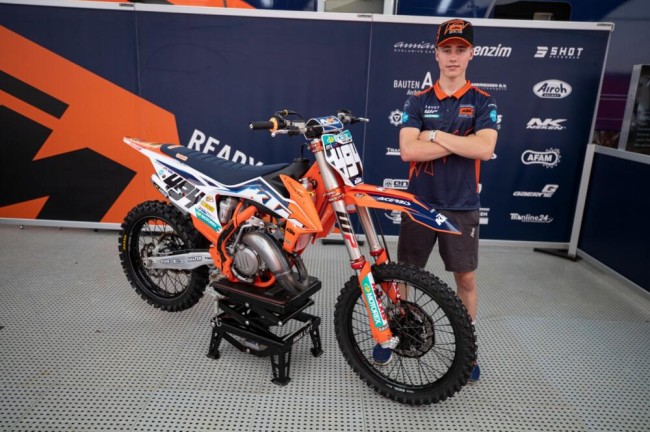 Young German, Maximilian Werner has showed promise in the EMX125 series this year but has announced he’s decided to part ways with the Kosak KTM team.

“It’s with sadness that I have to announce that me and Kosak KTM have parted ways. The last two and a half years have been good and I wish them nothing but the best for the future. Sometimes things just don’t work out like they meant to be. No hard feelings…”, Werner stated on social media.

Fortunately, Werner has already made plans for the rest of the season as he’s landed a ride with the DIGA-Procross KTM team.

You can read the press release below:

Starting next weekend (Note: we believe it’s starting from this weekend in Ernee), German junior athlete Maximilian Werner will be competing for the Cologne-based DIGA Procross KTM Racing Team in the EMX125 and the ADAC MX Junior Cup 125.

The 16-year-old Maximilian Werner already collected his first points in the EMX125 last season and finished the ADAC MX Junior Cup 125 in third place overall. After a promising preparation for the season and third place in the Italian championship, the 2022 season up to here did not go as planned for Maximilian Werner. The young German showed his potential in every race and is one of the hot contenders for this year’s ADAC MX Junior Cup 125 title and is ready for his first podium in the EMX125.

DIGA Procross KTM Racing is looking forward to offering a young German athlete the opportunity to take the next steps in his young career in a professional environment.

Maximilian Werner: “I am very thankful for the opportunity that Justin Amian and DIGA Procross KTM are giving me. DIGA Procross gives me the best possible environment to perform and develop. I’m really looking forward to the upcoming tasks and representing DIGA Procross in the EMX125 and the ADAC MX Junior Cup 125.”

Justin Amian: “In addition to the DIGA Academy, we are also looking forward to offering a young athlete like Maximilian Werner the opportunity to develop at the highest level with DIGA Procross KTM Racing and to provide the best possible conditions to fulfil his potential.”