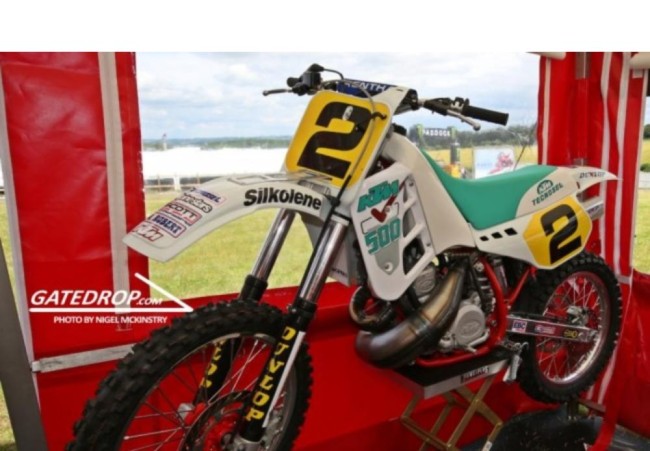 Former KTM factory mechanic, Dirk Vansummeren, has re-built Kurt Nicoll’s full factory, hand-made 1991 500 KTM machine right back to it’s original full factory condition! The bike looked to be sending Kurt to his first world title in 1991 but a broken leg took away the chance for Kurt and this hand-made 500cc weapon to be crowned world champion.

Browsing the British GP paddock on Friday before the race action, the machine certainly caught our eye, especially with the colour scheme from the early 90s and upon closer inspection it was indeed a bike worth looking at and talking about, such was the detail and uniqueness of the build and the machine.

Luckily for us, Dirk was on hand to share some information about the bike and explains the just what he did to bring the big, powerful KTM back to it’s former glory: “I had all the information from 1991 when I was working for the factory. I was in the team with Kurt Nicoll. I started from scratch, I took the whole engine apart, frame apart and i searched for all the original stuff which is not easy and cost a lot of money. I built a twin spark head, which has a coil and two spark plug heads – so they both work. It has a factory crank, a factory reed block, factory clutch. Also the exhaust is made from the templates that we found from 30 years ago.

“All the parts are like Kurt used to ride, the stickers are exactly the same as in 1991. This bike has about 67/68 horsepower, in this condition it is brand, brand new. The difference between Johan Boonen’s bike and Kurt Nicoll’s bike is that Kurt rode with a DEP silencer and we rode with a Doma silencer and this is also the Doma pipe. It’s a little bit special – there is only a few bikes like this existing. This is the real bike, this not a replica, it’s hand-made. 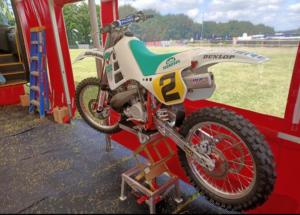 “The reason why we got into the team is because Kurt broke his femur and Johan Boonen, who was riding very well, was presented the factory bikes from Kurt. We got all the information from the team of how to set-up the bike and that’s how I got involved with the factory team. Everything is special on this bike.”

You can see Nicoll in action on it at the start of the 1991 500 World Championship below: