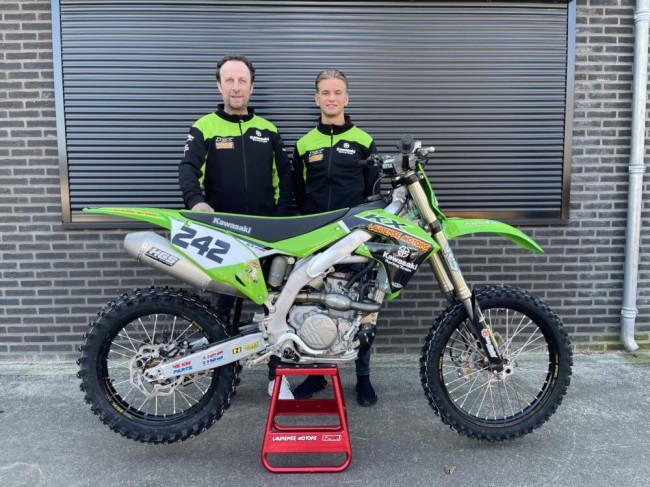 It’s now been officially announced that reigning Dutch Champion Kjell Verbruggen will ride for the Kawasaki Team of Laurense Motors for the 2022 season. Verbruggen won the Dutch title in the ONK at the KNMV last year.

Due to the corona problem, the Dutch Masters of Motocross was canceled and the ONK championship was the highest attainable national championship.

This year, as well as the ONK, the Dutch Masters of Motocross and the EMX250 championships are on the calendar of the brand new Kawasaki rider.

Besides the support of Kawasaki Benelux and Laurense Motors, Verbruggen can count on the support of HNR tuning, Putoline, Haan Wheels, Dunlop, Moto-Master and of course Twin-Air air filters, among others.

The HGS provides the extra HP and Verbruggen is dressed in Thor clothing and Oakley glasses for optimal visibility. WLM racing inc. provides the perfect look in terms of sticker sets.

The less good news is that Verbruggen has to skip the first EMX and also the DMoM this Sunday in Arnhem. Kjell is not yet fully recovered from a knee injury sustained last winter.

When Verbruggen is recovered, he will be back behind the starting gate with his super fast Kawasaki KX 250.