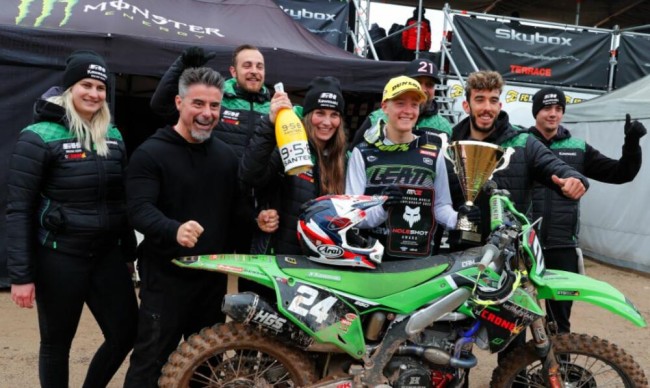 The Norwegian youngster used the excellent gate-pick he had earnt during Qualifying to exit turn one fourth in the first moto and already on the opening lap he had moved into third to put the pressure on the leaders in a three-rider breakaway at the head of the field; on lap six he took over second with a decisive outside pass in a long sweeping turn. The only rider to dip his lap times below 2-10 more than twice during the race the Kawasaki rider maintained the pressure despite the roost off the leader’s rear wheel but he had to back off slightly in the last two laps after his goggles were filled-in with wet sand off backmarkers; nevertheless he finished a highly-impressive second, his maiden top-three GP moto finish. His KX250 getting superb drive out of the gate in race two the twenty-one-year-old took a clear holeshot. Momentarily losing drive in soft sand on the approach to a step-up jump halfway round the lap he surrendered the lead temporarily but was back in front before the completion of the opening lap with a stunning pass and he immediately opened up a good lead, extending it to six seconds at one stage. Entering the final stages he eventually succumbed to pressure from the more-experienced series-leader after leading for eleven of the sixteen laps but was still secure in second until he clipped the tuff-blocs through an artificial chicane; he remounted fourth, still sufficient to retain second overall on the day for the first podium finish of his young GP career. The thirty-eight-point haul has also advanced him to sixth in the series standings.

Kevin Horgmo: “Second overall; the best day of my career so far. I was leading for a while in the second race and felt comfortable but Jago was coming fast so I had to let him pass. I tried to follow and made that silly mistake. I was also leading in Portugal so it wasn’t the first time but when I started to think about the podium perhaps I lost a little focus. The first race was also good; my best moto result so far. I concentrated on staying with Jago and that pace kept everyone else off my rear wheel. I could manage that comfortably but I had a little trouble with dirt on my goggles at the end. It’s all coming together well; I’ve had the speed for a podium for some time and I felt it was my time to put it together. Now I hope I will be there more often. “

The first moto was over already on the opening lap for Big Van World MTX Kawasaki’s Mikkel Haarup as another rider tipped over in front of him halfway round the opening lap and damaged the KX250’s exhaust. Pushed wide at the start of race two the Dane found himself fourteenth on the opening lap but he persisted all moto to take over ninth position four laps from the end. He is now fifth in the series points standings.

Mikkel Haarup: “It wasn’t an ideal weekend after my three podiums in a row but there were also some positives. I did my best timed practice so far and that has been something we’ve been focusing on. I made a mistake at the start of the Qualifying race yesterday which cost us for the rest of the weekend. I expected the start to be softer and raised the holeshot device too much; I wheelie out of the gate and had to clutch it. Then I made a little mistake at the end after getting back to fifth; I cased a jump, went down and had the air knocked out of me so I I had to start from the nineteenth gate today. That left me in the pack in both motos and my exhaust was smashed when I landed on the bike of someone else on the first lap of race one. I regrouped after a bad start in race two and made some nice passes for ninth. I know I can do much better but these weekends happen and we will rebound next round; the entire team is motivated to come back even stronger.“