Ken Roczen – I feel really good on the bike 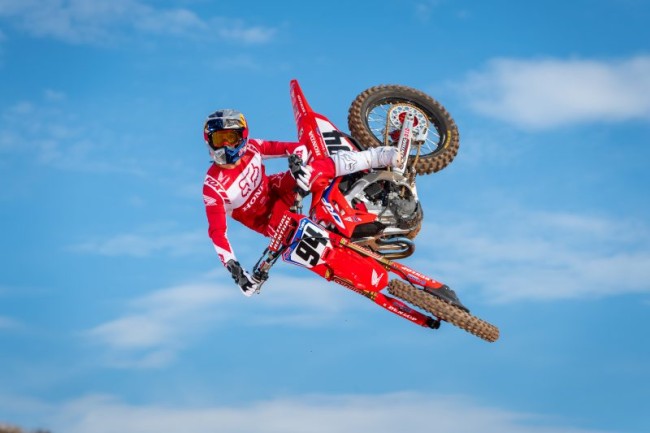 Ken Roczen believes taking the summer off to let his body recover has been the best decision for himself and the team as they prepare for the 2021 supercross season with the all-new Honda and Justin Brayton says Roczen is flying!

The Penrite Honda rider has been riding with Roczen recently and said: “I got to really see where my speed was compared to him, he is incredible at the moment, it’s been really fun to witness that and be a part of it and try and get my level up to where I think it should be and close to his.”

Roczen meanwhile confirmed he feels skipping 2020 outdoors was the best decision for 2021 season: “I think this was the best decision for me and the team essentially. I spent my entire off-season training out here in California for a change of pace and with the new bike coming out,” explained the German. “I just wanted to be around the team and the team to see the work I put in and the progression I’ve been making and this is definitely what we have accomplished. I am super stoked being out here and for the first time in a long time I’ve been enjoying what I’ve been doing and I was able to put in a good amount of work and put in consistent days, I feel really good on the bike.

I think taking the outdoor season off was definitely the right call, we will go from here, things can change in a hurry but I am just stoked where I am at and with the little one, being able to race as a dad now is super rad, I am looking forward to it.”

The extremely talented Roczen appears very happy on the new Honda, believing his has found good settings and a consistency with the bike on different tracks – something he didn’t have with the last model. “For right now we are going racing just to see where we are at, I’m trying not to focus too much on settings. But we all know that we all know that there are going to be some changes happening but at the same time I am just going and enjoying what I am doing, making little changes here and there. We have a really good plan in the off-season and making the bike solid. I have been on the same stuff now fore quite a few weeks now and that’s what I am going to go with.

“The bike is a lot more consistent,” he explained. “We haven’t really tested too much to be honest because I was pretty comfortable right away. I have been riding pretty decent on it and been keeping it the same compared to last year – I was chasing things a lot more especially going to different types of dirt and different types of track. I am looking forward to putting it to the test here in the first few rounds and in general getting back racing. I have been really liking the bike so far and we didn’t really have to put too many hours into testing, I could just focus on my riding and my training.”

If Roczen has managed to get a handle on his health and armed with a new bike he loves, this could well be his best chance since that devastating 2017 injury to take the highly coveted 450 supercross title. And with a rider of Chase Sexton’s caliber now on the team, it means Roczen has no guarantee of being the exclusive number one rider that he has been used too for most of his career in the USA if his performances aren’t where he and the team expect him to be.

See Roczen testing the Honda below in this excellent video from Fox racing: