Justin Bogle: It feels good to get this top ten 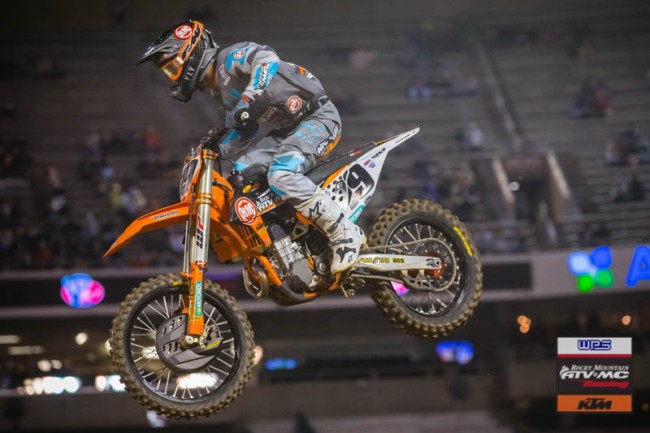 Team Rocky Mountain ATV/MC-KTM-WPS returned to Camping World Stadium for the second of two races in Orlando, FL. This marked the eighth round of the 2021 Monster Energy Supercross Series and midpoint of the season. It proved to be a good night for team rider Justin Bogle as he put in a solid ride for his first top-10 finish of the season.

Justin Bogle had the flow of the track down early in the night as he came out of the gate in 450 Heat 1 hard on the gas to slot himself just outside the top 5 after the first lap. He then found himself in a battle for position, securing 6th place at the finish and transferring to the main event. Justin once again timed the gate perfectly and came close to grabbing the holeshot as he rounded the first turn in the top 3. He got held up before the finish of the first lap, however, as he nearly missed a collision with the riders in front of him. After those issues early in the race, the Galfer USA supported rider worked his way from outside the top 10 to his 10th place finish at the checkered flag. Orlando 2 marks his first finish inside the top 10 for the season.

“It feels good to get this top ten after the start I had to the season. I’ve recently changed up a few things in my program and tonight shows it was a move in the right direction. I believe in the process and will be putting in the time during the break to be ready to fight at Daytona in two weeks for another top ten.” – Justin Bogle

Joey Savatgy launched out of the gate in 450 Heat 1 and found himself inside the top 10 early on. The Gear Off Road supported rider kept the charge through the race, working his way to 7th place by the checkered flag to transfer straight to the main event. In the main, a mid-pack start had Joey working his way forward from the beginning. He worked his way into the top ten by mid-race and started to put pressure on 8th and 9th before going down. After remounting, he finished the night in 16th position.

“While tonight’s result doesn’t show it, I was riding well out there tonight. The main thing is I head into the break healthy. I feel good on the bike and progressing forward, so we will regroup during this break and come back ready in two weeks for Daytona.”– Joey Savatgy

The team will take a week off before coming back for round 9 of the 2021 Monster Energy Supercross Series at Daytona International Speedway in Daytona, FL.