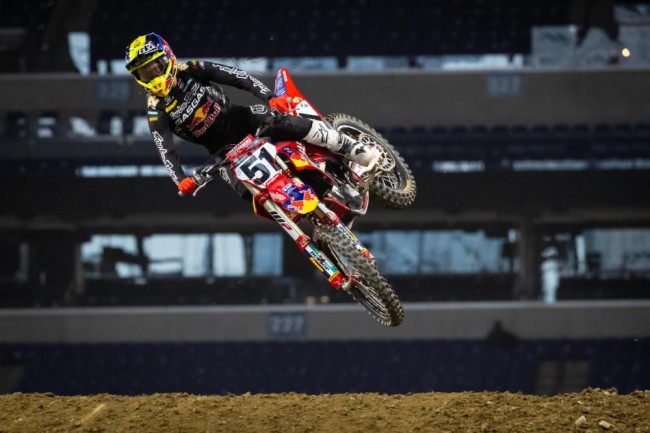 Despite being generally happy with his Gas Gas machine, Justin Barcia admits that he is still searching for more at Indy, and not being able to test isn’t helping his ability to get more from the machine on the different dirt.

Barcia didn’t have a great Indy one but bounced back impressively with a second place on Tuesday night, holding off Tomac for second – but he couldn’t do anything about race winner Ken Roczen who passed the Gas Gas man immediately for the lead and left Barcia in his wake.

“It’s difficult”, admitted Barcia in the press conference. “Obviously, new team and they’re new to the 450 class, so it’s definitely hard. Everything is new. The dirt here is a lot different than Houston, so we’re trying to figure it out. It’s not easy not being able to test. We didn’t have these conditions in the off-season testing and stuff, so it’s definitely searching around. We’ve taken some good stabs at it. I would say we haven’t nailed it yet. I would have definitely liked to have had a little more in that main event, it was a good race, but definitely could have been better. We’re definitely searching.

“No stress, though,” he continued, asserting the positives. “It’s a really consistent bike, it doesn’t do anything too crazy. It’s just like I’m looking for a little bit more. It’s definitely hard. We’re here during the week, but there’s not much to do for riding or testing or anything like that. It’s just kind of like show up for practice and try to take a stab at it.. I would say before in the past I was probably really far away from something, and now this is not even five percent. So we’re just trying to find that little percentage, because the field is so stacked that everyone is going so fast. We just need that little percentage to be up there to win.”

Will Barcia be able to find the setting he really wants for the third night of racing in Indy? It won’t be long until we find out!