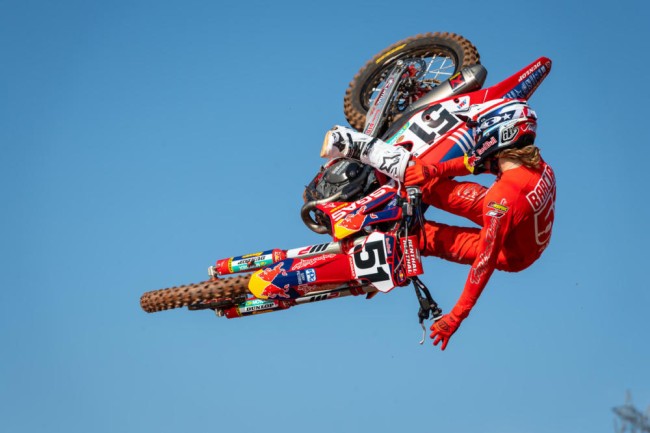 Justin Barcia is full of confidence and ready to make his debut on the Gas Gas – even saying it’s weird that everything has gone so smoothly!

Speaking in the press conference, a buzzing Barcia was very positive about his switch to the red Gas Gas machine and says he has been able to compare his speed after riding with Jason Anderson and Ken Roczen.

“It’s been super good,” enthused Barcia. “I’ve been having a good time, moved out to California everything has been awesome – the team and me are gelling really well. It’s been a smooth off-season. it’s a bit weird, everything has went really well! I’ve adapted to the bike quickly, definitely put in a lot of laps, it does a lot of good things – it’s a really predictable bike, for me I have everything falling in place.

“Jason (Anderson) has been out on the track so I can see good speed – Jason is always fast. Today actually, Kenny and Brayton were out on the track and we all rode together, so that was cool. Man, it’s just been fun, I’ve been enjoying it, I’m excited to go racing,” he concluded.

You can see just how good Barcia is feeling on the bike below in this excellent Vurbmoto edit. Barcia is a very exciting part of the 2021 season with his team change and the confidence he is carrying – so will this move be the “X factory” he is looking for and will he finally challenge for the title? It looks to be his best chance so far.