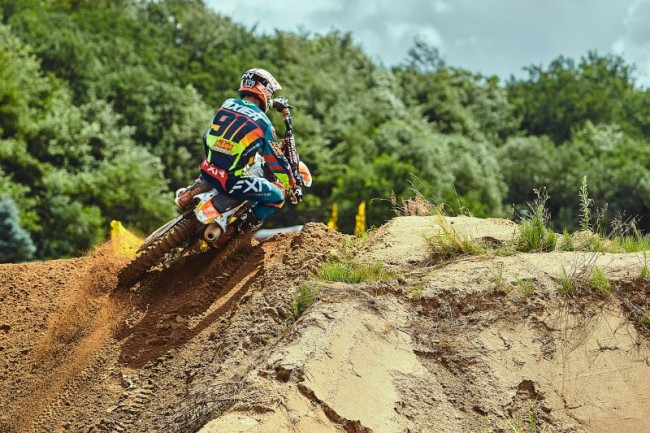 There was drama at the second round of the ADAC MX Masters which took place at Tensfeld at the weekend. Tixier was deemed to have jumped under a waving yellow flag and got disqualified from a moto.

However, the Sarholz KTM rider has proof that he didn’t jump the yellow flag and showed the video evidence to race direction and they still give him the penalty.

“This weekend I was racing at the German championship (Mx Master Adac). Unfortunately it was again at the same time as the MXGP but I wanted to respect my agreements with my partners, Team Sarholz and the ADAC organization. In the second race I was confronted with a sanction (disqualification) imposed by the German race director who considered that I jumped under a yellow flag. I want to say publicly that I didn’t jump under this flag. I know the risks of our sport and I would never have risked the life of a rider on the ground”, Tixier stated.

“In spite of numerous testimonies and the complaint (protest – video showing that I didn’t jumped under this yellow flag) made by my team to the commission , the race director didn’t want to hear anything. They found another pretext: I touched the yellow flag (and they explained all this to me by laughing at me). I am fighting for the title against Max Nagl, who I respect. But I have to admit that sometimes there is a will to harm some riders through abusive decisions with heavy consequences. It’s a sport injustice because of a bad intentioned person wanting to use his power and it is sad for our sport. We will fight until the end of this championship to have the opportunity to perform fairly. Thanks to Team Sarholz for their support”, Tixier concluded.