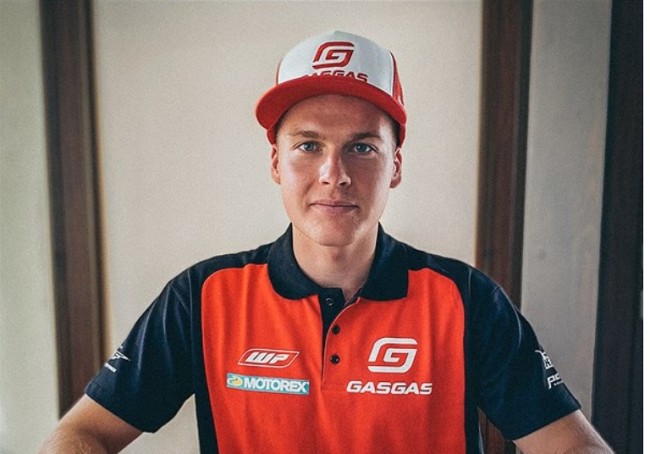 Scroll through the 2020 MXGP championship standings and it’s a long way down to find former MX2 world champion and 2019 Rookie of the Year Pauls Jonass. The recently-turned 24-year old ranked 31st last season with only three moto finishes in his second term in the premier class and for the Rockstar Energy IceOne Husqvarna team. After round two in Holland Jonass crashed while training and sustained an injury that kept him out of racing and the subsequently hectic ‘Covid-19’ condensed calendar for the whole year.

“Four compressed vertebrae, six broken spinous processes – the ‘spikes’ coming out of the vertebrae bones – and ligament damage in the back, which was actually a bad one because it meant quite a lot of time with a neck brace. Oh, and two ribs as well,” he tells of the damage.

The absent Latvian also entered a contract-less void in 2020 and eventually took Glenn Coldenhoff’s vacated saddle at GasGas Standing Construct for 2021. He is now re-building the hype. “I would say most of the guys have already forgotten me!” he smiles of his rivals. “That’s what I’ve heard anyway…but it doesn’t matter to me.”

As with most stories of serious injury, Jonass’ break from his vocation and lifestyle allowed for some valuable perspective. “The adrenaline from racing was missing and not much can replace it,” he admitted. “I will say that four months without racing or riding you kinda get used to that inactivity…but then with just one taste of the bike the story changes again.”

#41’s distance from racing allowed him to consider his options and his future and, despite being offered a contract extension with IceOne, decided to stay ‘Austrian’ but change brand. With almost six years of Grand Prix racing to his name Jonass wanted to refresh his working environment. “[IceOne] is a great team and they work so hard for the riders but I wanted something different,” he says. “What I had wasn’t really working for me. The results were OK but I was not enjoying my riding. The mechanics work their asses-off, and Antti [Pyrhonen, Team Manager] is really committed. They all try to make everything as professional as possible. Moving was my choice, and my wish to have more freedom.”

Jonass is now heading the GasGas effort and steering the MC450F that claimed victory in the third round of 2020 when Coldenhoff ruled the opening outing of the Latvian triple header at Kegums. When asked on the differences between the Husqvarna FC450F, Jonass claims the immediate variation comes through the bike’s dimensions.

“It’s strange but somehow it feels smaller and more compact than the Husky,” he reveals. “I haven’t ridden a KTM for quite a while now so my nearest reference is the Husqvarna. Wim and the guys set up everything as I likedand I feel comfortable when I can move the bike around. When I’m on the bike it feels more like a 250 than a 450. I like the smaller bike, so it’s all good for me! But, like I said to the guys, practicing and testing is one thing and racing is another so we’ll get more information in pre-season.”

GasGas Standing Construct will have an all-new rider line-up in 2021 with Jonass being joined by Dutchman Brian Bogers. The team are waiting for a new frame concept for the MC450F but in the meantime are testing WP’s new air shock technology with Bogers, as Jonassfocusses on building up his speed once more.