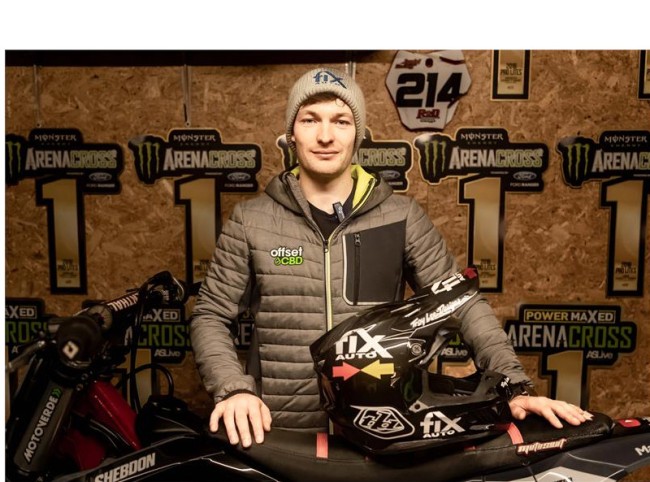 The 25-year-old has a solid and successful history in the arena of supercross riding. He’s a two-time Arenacross Pro Lite Champion and is a hot tip to be amongst the Pro class leaders in the 2023 Arenacross Tour presented by Fix Auto UK.

Fresh from a six-month spell in America, competing in the AMA Supercross, Clayton has been racing his 450cc GASGAS bike against the world’s best.

Fix Auto UK has sponsored the Arenacross Tour on three previous occasions, capitalising on mass brand awareness. The 2023 Tour will be no different. Having benefited from extensive event publicity that included national and regional TV coverage, the network has increased its role as the Tour’s Presenting Partner. With the addition of Clayton as a sponsored athlete, the brand’s coverage will be immense, both on, and off the track.

Commenting on the addition of the Pro athlete to its ranks, Grace Weddell, Head of Brand and Communications for Fix Auto UK, said; “Joe’s dedication and racing expertise made him our first choice to be our very first Fix Auto UK sponsored motorsport athlete. It adds a whole new dimension to our partnership, and we’ll be supporting Joe for the whole Tour. We’ll obviously be rooting for him to take the title!”

Speaking from his South Devon home, Joe added; “I’m extremely proud to be appointed as Fix Auto UK’s sponsored motorsport athlete for the 2023 Arenacross Tour. From the Fix Auto UK bodyshops in the southwest, and their involvement in previous AX Tours, I am well aware of the network and associated Franchise Partners. I’m proud to be part of the Fix Auto family and I’ll be giving it my best shot at taking the overall honours for them.”

The family-friendly Arenacross Tour features plenty of foyer activation with rider autographs, Traxxas radio controlled have-a-go, merchandise stalls, food and drink. This is followed with the pre-Show build up, which then leads into action-packed racing interspersed with jaw-dropping Freestyle MX trickery. It all kicks off this Friday the 20th of January at the SSE Arena, Belfast.