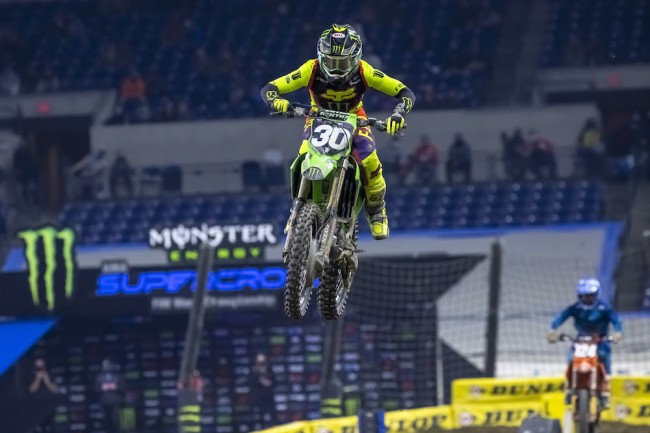 For Shimoda, the day started out with the No. 30 machine momentarily clocking the fastest time during the first 250SX qualifying session before finishing fourth overall in combined qualifying with a 48.245 lap time.

Once the gate dropped for the first 250SX heat race of the night, Shimoda launched his KX™250 into a top-4 position and quickly advanced up to third on Lap 2 after setting the quickest lap time of the race. From there, Shimoda engaged in an intense battle for second and would momentarily overtake not only second but also the leader with two laps to go but dropped back to third after making contact with a tough block at Turn 8. Comfortably ahead of the rest of the field, Shimoda picked himself up and finished the race in third.

As the 250SX Main Event began, Shimoda again shot out of the gate in fourth place and made quick work of two riders in front of him to advance into second place before the end of Lap 2. Sitting securely in second position, Shimoda did as he always does and settled into a consistent flow giving himself a comfortable gap ahead of third place. When the checkered flag came out, Shimoda crossed the finish line with a personal best second place finish.

Saturday’s result is Shimoda’s second career podium and moves the Japanese rider into third in points for the 250 East Regional Championship.

Jo Shimoda: This podium feels really good. My KX250 was a rocket out the gate and helped me move into second place after a couple laps. Once I was there, the only thing on my mind was not letting anyone get past. The track was rough tonight and a lot of riders made mistakes, but I controlled what I could and earned this one.