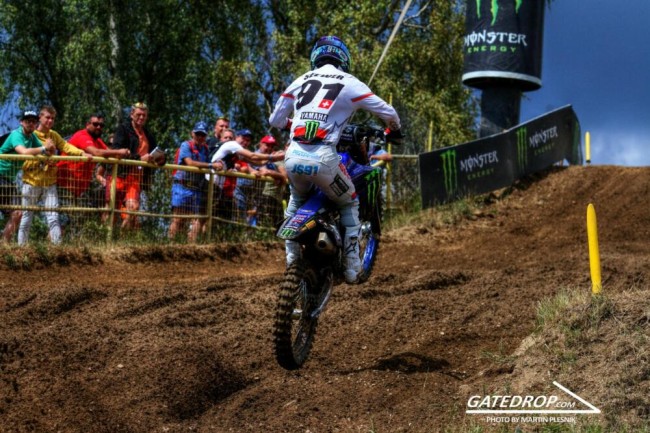 Five times FIM world championship runner-up, Jeremy Seewer, will spearhead Yamaha’s three-rider quest for the 2023 MXGP crown with the latest generation of YZ450F technology. The 28-year-old believes his new racebike could be the key ingredient to move from the second step of the series-podium to the top.

2022 was the Swiss’ best season to-date, with three victories and nine rostrum appearances. Alongside fellow winners and champions like Glenn Coldenhoff and Maxime Renaux in the Monster Energy Yamaha squad, Seewer’s consistency and longevity (’23 will be his sixth season with Yamaha and he hasn’t competed with any other brand in the premier class) has elevated him to the peak of the pecking order.

Aside from various promotional duties that have kept Seewer occupied in a ‘normal’ winter period – compared to the narrow two-month stretch at the end of 2021.

“I have been busy, there have been a lot of events,” he tells us. “Like the Blu Cru Masterclass and the new bike press launch but I like doing things with the kids that have a passion for the sport and want to learn; it’s good to be an MXGP rider in that position.” he has also been honing the 2023 YZ450F with a view towards the MXGP spec.

“The new bike has meant more riding than usual but, being a smaller guy, it feels lighter, slimmer,” Seewer opines. “We worked a lot to get the old one to the point where it was competitive and it could win GPs but it still felt like a ‘big’ bike. I feel like this new version has been ‘made for me’. It makes riding fast much easier in many aspects.”

Yamaha shaved almost 2.5kg from the 2023 production YZ450F but it was reductions to elements like the airbox, and the completely new chassis as well as a significant priority on ergonomics that has made the platform more usable and possibly more effective for Grand Prix racers. Seewer and Yamaha have been analysing base suspension settings, start gate performance and engine power delivery as part of the customisation process for 2023.

“The stock bike is at a high level but for MXGP it has to be a package that fits together so we’ve been trying to get it as good as possible,” he says. “If I had to race next week then I think I would be quite OK. We would make it work but the problem is that you never really know how good everything is until you race some of the other guys. Then, even when you are happy, you still want to try things to see if it can be even better.”

KTM and GASGAS have been working on the second iterations of the KTM 450 SX-F and MC 450F after the bike’s redesign for 2022. Jeffrey Herlings did not complete a single Grand Prix lap due to his broken angle injury and Jorge Prado classified 3rd in the standings but has allegedly benefitted from a fresh chassis update in the winter. Yamaha’s process will be carefully monitored with Coldenhoff (31) lending his experience for what will be a third year in blue and Renaux eyeing Seewer’s status after his impressive debut season classifying 4th.

For #91 2022 marked a year in which he was healthy, quick and one of the very few to mount a weekly challenge to eventual champion Tim Gajser. A final push is required to turn his position as ‘2nd place man’ to one that can finally grasp the main prize.

“Every year you try to work harder and find more potential,” he states. “You can’t relax because you might go backwards…but I’ve been able to find a good balance.”