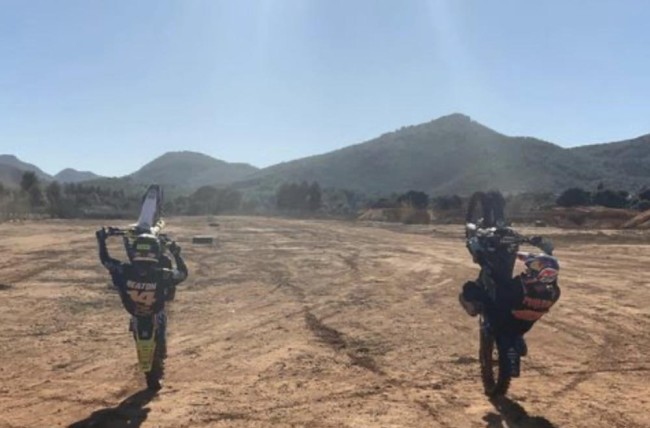 The elongated MXGP off-season has given riders time to train, test and practice while avoid the worst of European travel restrictions and the factory Rockstar Energy Husqvarna MX2 team completed several weeks of work in Catalunya ahead of the 2021 campaign. In that stint, lead rider Jed Beaton linked up with fellow Australian and MotoGP works Ducati Lenovo Team racer Jack Miller for some motocross action before the latter flew to Qatar for testing and the opening two GPs.

“He used to race when he was younger so he knows half of what to do,” Beaton says. “It was good to have a laugh with another Aussie. He was good fun to practice with. I haven’t seen any of the other MotoGP riders on the dirt but I’m willing to bet he is one of the fastest on a motocross bike.”

The pair visited the popular circuit of Roccos Ranch, adjacent to the MotoGP venue Circuit de Barcelona-Catalunya where the 23-year old MX2 hotshot experienced a new discipline of ‘off-road’.

“I went flat-tracking with him one day and it was one of the funniest days riding I’ve had in a long, long time because it was completely different and brand new for me,” Beaton says.“I couldn’t wipe the smile off my face.”

Beaton finished 4th in the 2020 MX2 series and is one of the names pegged to challenge the likes of Tom Vialle and JagoGeerts for the championship in ’21. Compared to the preparation and intensity of trying to succeed in motocross Beaton liked the attitude and openness of Miller’s approach; himself under the microscope to deliver on the asphalt with the Desmosedici this summer. In particular the tendency MotoGP stars have to ride different bikes together to compensate for the lack of time on race machinery.

“He’s crazy and doesn’t care a jot,” Beaton laughs. “He’s really into motocross and riding. I like the mentality those guys have. They are not afraid to train or ride together. They always seem to be having fun. With us, I think we’re more secretive about what we are doing. I respect they do a lot of things together, it’s pretty cool.”