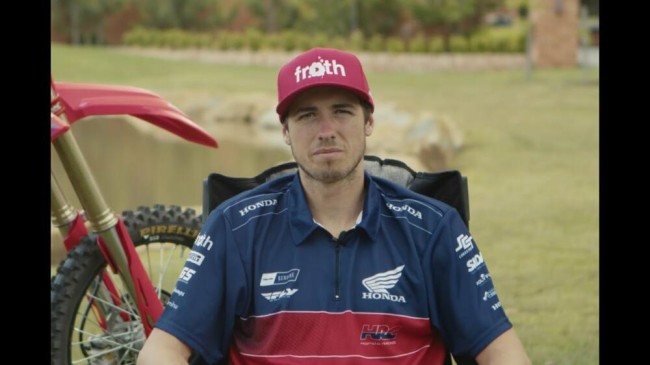 Jed Beaton has explained the reason why he has decided to return home to Australia for the 2023 season. The former MX2 GP podium man was talking to a few teams to race the MXGP World Championship – we believe one of those teams being JM Honda Racing.

However, Beaton had to wait on the team(s) to try and find budget to make it possible – he was forced to wait longer than he’d have liked so decided to take matters into his own hands and sign with Honda Racing Australia.

“I ended up coming home, I was speaking to a few teams over there just waiting for a deal. Obviously at the end of the year the budgets and stuff get sorted, but I was waiting for a little bit of an extra budget over there and see what we could do. At the end of the day I was just waiting and waiting, so I kind of made a decision myself, I kind of really wanted to know what I was doing, so decided to make the decision to come home and race here”, Beaton explained.

The goals for the Aussie next year are to run at the front of the MX1 Australian championship and there’s no doubt he’ll go into the season as one of the favourites who will have Kyle Webster as a teammate.

“Next year is just to get back to full health, feel good, feel good on the bike and be competitive over here. My main goal would be to go out and win races and be solid in the championship. The main goal is that, but first is just getting back into the swing of things, getting back home, obviously been away for six years so getting everything back sorted, and then building from there to a solid championship”, added Beaton.

Let’s hope Beaton stays on the radar of some MXGP teams or even teams in America as he has a lot of talent and it would be nice to see him race Internationally in the future.