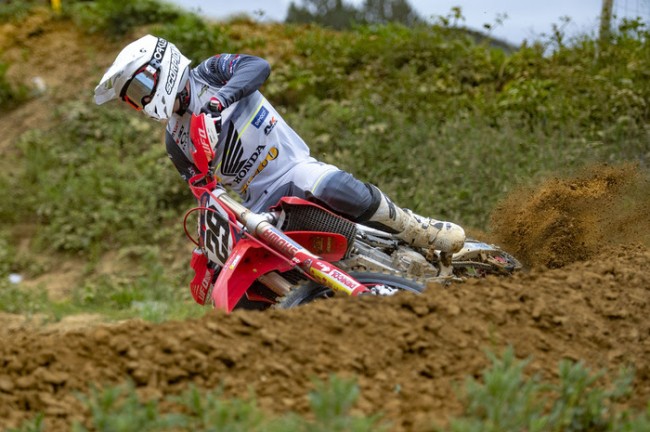 Henry Jacobi of the JM Racing Honda team had a positive start to his international racing season. Jacobi lined up for action at an international event in Crisolles in France, an event hat attracted entries from several MXGP – and MX2 world championship riders. It therefore presented a perfect opportunity to prepare for the upcoming GP season.

Jacobi was last in action at the GP of Spain in October 2020. After a seven month layoff, it was wait and see to determine how he would go, but he showed notice of intent from the first meters. He qualified ninth, and after some pitched battles, he finished fifth in the opening race.

The second race saw some even better riding from the German, although he had to overcome a setback. He took the early lead after the start, but the race was red-flagged after a crash. Jacobi again launched with the leaders, and held a top three spot for a few laps. He lost a position towards the end, finishing fourth.

Jacobi narrowly missed the podium and finished fourth overall. The team was content with their first serious race outing for the season, and will keep building towards the first GP in Russia in three weeks’ time.

“We’ve enjoyed a great preparation period with Henry,” team owner Jacky Martens said. “It was good to see that he could fight with the leading riders, and had a positive conclusion to both races. We will continue along this path to be ready for the first GP.”

Henry Jacobi himself was also happy with the outing. “It was a positive start to the season for us. After a seven month pause, we did not know what to expect. It was fantastic to line up behind the gate again. It went better and better as the day progressed, and I was satisfied with the outing.”

The team will be in action at the opening MXGP of the season in Russia.