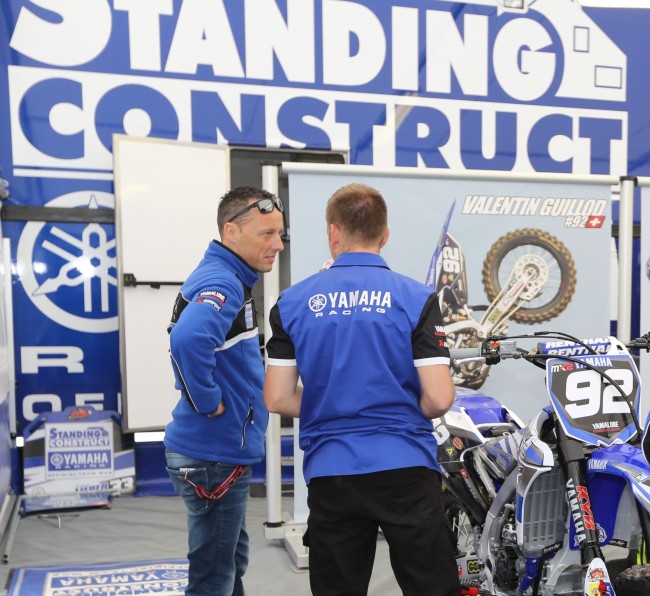 Tim Mathys is a very successful team manager in the paddock as his team, Standing Construct has had a lot of success in the GP’s. Tim seems to always be able to get the best out of his riders and enjoys working with younger riders. This year the team made the decision to make the switch from KTM to Yamaha – they are now the official Yamaha team.

Tim had a lot of success when they ran with KTM machinery winning GP’s with Glenn Coldenhoff and had a very fast Valetin Guillod last year. This year didn’t go to plan as they got material from Yamaha pretty late but it has turned around and they are now challenging for the world title with Valentin.

We caught up with Tim to discuss the season they are having so far as well as plans for next year.

Gatedrop: Before the season you decided to switch to Yamaha, how tricky was it too make this decision after a lot of success with KTM?

Tim Mathys: Yeah, for sure, with KTM we knew what to do, we had a good base to make a fast bike. I think that last year we had one of the fastest bikes, if not the fastest in the MX2 class. For sure with being a KTM team we would always be a satellite team as there is already a KTM factory team. Yamaha contacted us in June and proposed us to be the official number one team with very good support from Yamaha. After a few meetings we decided we had to do that because as a number one team we have better support for development etc. During the winter it was pretty difficult because the Yamaha is a really good bike but to perform at the highest level you just need something extra. The material came really late but my crew worked really hard and at the first GP in Qatar we already had a good bike but we kept working, working and working. As you can see maybe not today but at last few GP’s we have a top bike. For 2016 we are working on a big development and for sure the bike will even be better in 2016.

Gatedrop: What took so long for the material to come so late before the start of the season?

Gatedrop: At the start of the season Julien showed great speed, were you surprised by that?

Tim Mathys: Well, to be honest, yes. We saw during the testing and practicing in winter that he was good but he was a little slower than what Valentin was. In Qatar he surprised us and I think also himself with the result he got and unfortunately after a few weeks his grandfather passed away, they are a really close family so it had a big impact on him. They thought that the reasons for his not so good performances were other reasons so they changed the way of training etc. In the last two months they switched back to the old system working with Yves and I see that it is paying off. Today in the first heat unfortunately he had some problems with the clutch because he is so abusing on the clutch. In the second heat every lap he went past us we wrote on the pit board ‘easy on the clutch’ and he was third so he is at the level we know he is capable of again.

Gatedrop: Before the season everyone knew Valentin was fast but to show the speed he has been, are you surprised he is battling for the title?

Tim Mathys: You know, we knew that Valentin could do top three but at the beginning of the season he was struggling a little with the set-up of the bike, he made some wrong choices and after three or four GP’s we had a setup that was not the most perfect we could have but it was one that suited his riding style. Since we have had the bike like that he has been performing like he is doing now. Today was a difficult race for him, the first heat he was not so good himself but he saved some points. In the second heat he was riding a lot better but unfortunately van doninck crashed after a jump and Valentin was already in the air and he landed on van doninck bending the bike completely.

Gatedrop: Do you think working with Yves Demaria has been a good influence for Valentin?

Tim Mathys: That is for sure, he has been a big part of the success so far this year, he’s not also coach of the riders but he also sees things on the bike, he helps us doing the setup. Yeah, for sure, like I said he is not only a coach but with everything in the team he has been very co-operative.

Gatedrop: Do you think pressure got to Valentin today or do you think he just needs to improve his sand riding?

Tim Mathys: I think it’s a bit of everything together, I think the thing that affected him the most this weekend was all the negotiations with the teams the past weeks, they were some teams that made him crazy with some ridiculous offers even when he let them know that he wasn’t interested. It can be difficult for a young guy to deal with that and I think that was the main reason why he wasn’t so good today. But again for me in the second heat he was good, he just had some bad luck that someone crashed behind a jump and he was already taking off when he saw it and that’s what cost the lose of points today.

Gatedrop: There have been many injuries this year, what do you think the reason for this is?

Tim Mathys: It’s difficult to say, I just think that the level is so high that everyone is riding just on the edge and I think that that’s the main reason.

Gatedrop: Valentin has to go to MXGP next year, how do you think he will do in the class?

Tim Mathys: You know we always have to wait and see because its motocross but I think Valentin’s style will suit a lot better the 450 rather than the 250, that’s also the reason that Yamaha really wanted to keep him. We think he will do good, we won’t put any pressure on him, we just want him to give it 100% like he always does. Me, Myself, I am pretty confident that he will surprise at some races for sure.

Tim Mathys: Would be cool, last year at the nations we also had Julien ride for Belgium and Valentin for Switzerland so we hope it will be the same for this year.

Tim Mathys: Everything is signed, since Friday everyone signed. The only thing that can be made official is that Julien will stay. The second MX2 rider, I think a lot of people know, even you and a lot of people in the paddock know who it is but with his current team he has a deal that can’t make it official before the 15th September but it is a guy who is currently injured and has won races so I think it’s pretty easy to figure out who it is. For MXGP, we will have Valentin and it will be his rookie year but we believe in him and think he will have a good year!