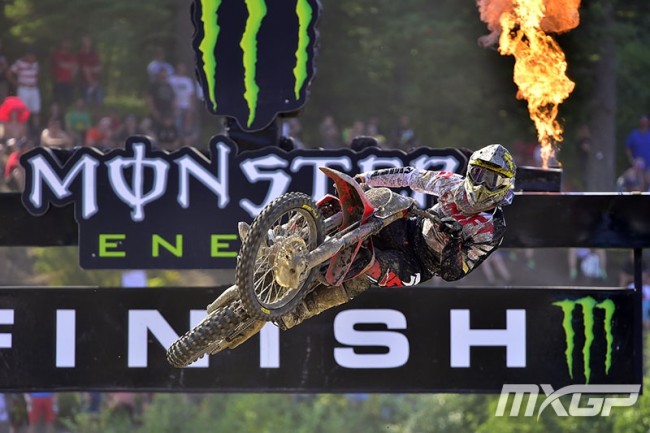 Tim Gajser is the next big thing in MXGP and HRC Honda have already signed the talented Slovenian for another five years as they try to win some world titles.

But Gajser’s first world title could come this season! Tim, who is still only 18, was the first rider to beat Jeffrey Herlings straight up in a number of years when he did it in Arco di Trenton to win his first ever GP.

Now with Herlings out, and his worst track of the year (Lommel) in his rear view mirror, Gasser, with four rounds to go, is only four points behind his teenaage rival and championship leader, Pauls Jonas, leaving it all to play for as they both go for their first ever world title.

We caught up with Tim to talk about the championship, his new deal with Honda and his interest in going to the USA and racing the 450 in MXGP.

Gatedrop: That was a tough day, a tough weekend, you had to come from the back each time.

Yeah, you it was tough. It was surviving not racing! But I take fifth and seventh place and came from far behind both times. In the first race I started 14th and came back to fifth so it was not too bad, in race two I came from last back to seventh so again not too bad. We will see, we have four races left and we will do our best.

Gatedrop: You are only four points behind the lead in the championship, it’s still very much on for you.

Sand is mot my favourite ground, I prefer hard-pack but we have taken some important points here and look forward to Mantova now.

Gatedrop: Herlings was always the favourite but now after his injury have you had to change your mentality to win the championship at such a young age?

It is shame he got injured, he was the fastest guy in mx2, we can say that. But that’s sport, it can happen to anyone. Now there are three of us really tight in the championship. I will fight, there are four rounds, eight motos, I will just do the as best as possible.

Gatedrop: Just going back a few round when you bet Herlings in Italy, you went toe to toe with him and had his pace on the hard-pack. Was that a big confidence booster to be as quick as him on those conditions?

Yeah, it was you know, we know I have speed on the hard pack but it’s much different in a race. There was the first time we had a fight straight up without any bike failure or crashes so yeah it was great to be in front on Jeffrey. Then it was also good in Maggiora and Teutschenthal but then I have had small crashes, in Latvia I injured my ankle so in Locket and here (Lommel) I was not at 100%.

Gatedrop: Do you think your injury should be ok in a couple of weeks at Mantova?

Yeah it is getting better every day so by then it should be great.

Gatedrop: You have signed for five years with HRC including MXGP and maybe some races in America?

Yeah but we are still concentrating on this season and then next year I will still stay in MX2 because I am still only 18.  After that we will speak about what happens. I still have a dream to race in the USA info the supercross because I really like it so we will see. (It now appears Tim may be racing A1 in 2016!).

Gatedrop: In Latvia at the Nations you rode the 450 really well, your style seems to suit the bike perfectly!