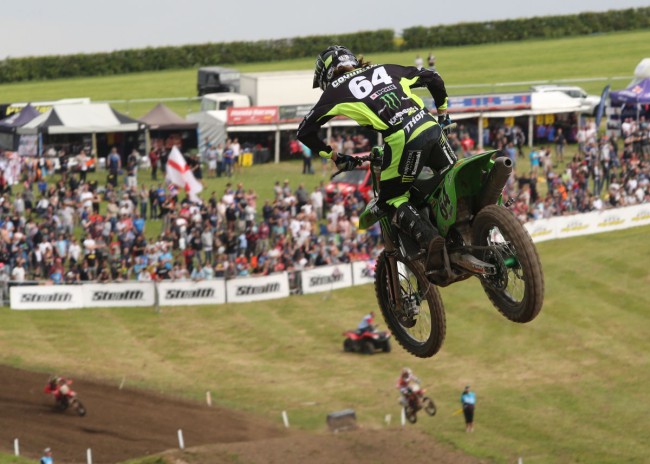 Thomas Covington made his first appearance in the GP scene when he decided to race a one-off EMX250 round at Matterley Basin in 2013. The following year he had then planned to do the first three over sea GP’s to prepare for what was going to be his first AMA Nationals season. However, after the first three rounds he got an offer to ride for Monster Energy Kawasaki and he decided to take it and stay in GP’s full time.

Since then there has been many ups and downs but there is one thing for sure and that is that racing the World Championship is making him a better rider. This year is only his second year as a professional and he started the season well on-board his Kawasaki. Gatedrop caught up with the American to discuss his season for far and what life is like at the GP’s.

Gatedrop: How did the weekend go for you?

Thomas Convington: Yeah, it wasn’t too bad, the first moto I got off to a pretty good start, think I was fifth on the first lap. I was able to stay there for a while and then Herlings got me, I was running sixth all moto but then Seewer just edged me out on the last lap. I’m kinda bummed on that but oh well, it was still a good race and it was fun. In the second moto I was coming out of the gate and hit neutral which meant I was dead last coming out of the first corner, I had to work my way up but ended up tenth. It was a good, solid top ten weekend so we will move on to the next one now.

Gatedrop: The first 3 over sea GP’s went really good for you..

Thomas Covington: Yeah, the over sea ones were really good you know, the tracks suited me really well. I think I’m always really prepared for the first three due to training in the off season, it’s hard for me to keep my fitness and stuff like that for the whole season. Next season I will maybe work on coming into the season a little slower and getting stronger towards the end. I’m still learning, it’s only my second year as a professional but hopefully I will keep learning and do better.

Gatedrop: Argentina seemed like a really cool country and the track was good too..

Thomas Covington: Yeah, Argentina GP was one of my favourite ones. For sure, the track was awesome and the fans were really cool so I am really looking forward to going back there again.

Gatedrop: Last year you had no GP experenice so you were guessing a little on bike set up, you must be a lot more prepared this year?

Gatedrop: The European GP’s haven’t went quite as well for you, do you think getting to grips with the hard pack tracks is still something you need to improve?

Thomas Covington:  Yeah, the European rounds get really gnarly because of all the different classes racing during the weekend and they don’t do so much track work in between moto’s so it’s super rough and gnarly. It’s something that I’m not really used to yet, in California, we don’t have too many rough tracks around there. It’s good though, its making me stronger and making me a better rider.

Gatedrop: I see you are riding some ONK Dutch championship rounds, so you are trying to learn the deep sand as well..

Thomas Covington: I’m living over in Holland so I’m riding in the sand every day trying to figure it out. It’s not something you learn in one year though, so I just have to keep working and trying to get better.

Gatedrop: We seen RV not get it all his own way at the start of the year in MXGP, are you surprised by that?

Thomas Convington: I dunno, I mean for sure I thought he would have done a little better that what he done but I knew it wasn’t going to be easy, I think he knew that as well.  He knew these guys were going to be tough, I think they are more prepared. You know it’s really hard for someone that has just rode in US their entire life to come over here and race for just one year. To try and do everything perfect in the first attempt, it’s hard to do but hopefully he can come back near the end of the season and battle with those guys again, I would like to see that.

Gatedrop: In a way are you kinda glad because people can see how hard it is for someone as fast as RV to come so it shows you are doing well..

Thomas Covington: Yeah, I guess you could say that but at the same time I would like to see him win. It’s always good hearing the American national anthem on the podium! For sure, it has opened up people’s eyes back home in the US to how strong these guys are. They’re the real deal, they are not messing around and go really fast, it’s good to see a lot of people in the US are seeing that now.

Gatedrop: Your deal with monster Kawasaki ends at the end of this year, do you think you will stay in GP’s for 2016?

Covington is enjoying life in the GP paddock and will stay for the 2016 season. Pic: Nigel McKinstry

Gatedrop: Has the team been decided yet?

Thomas Covington: Yeah, it’s not decided yet but I will probably stay with monster energy Kawasaki but we will see what happens.

Gatedrop: Do you ever see yourself in the MXGP class when you reach the age limit for the MX2 class or do you think you will go back to the US then?

Thomas Covington: Im not sure yet, I haven’t really decided on what I will do when its time for a 450. Right now I am thinking I will stay in GP’s until I am at least twenty-three and race the MX2 class and then go home but I might even go sooner than that if I get a good opportunity in the US. I will see how I feel closer to the time.

Gatedrop: You must really be loving the GP’s to consider staying until at least your twenty three?

Thomas Covington: Yeah, I mean I have wanted to go home a lot of times because it is hard being over here by myself and everything. I really enjoy the racing and the atmosphere at the GP’s as well as all the travelling and stuff, that’s what keeps me coming back as well as all the cool fans and all the different countries you get to see. The competition and racing is awesome as well.