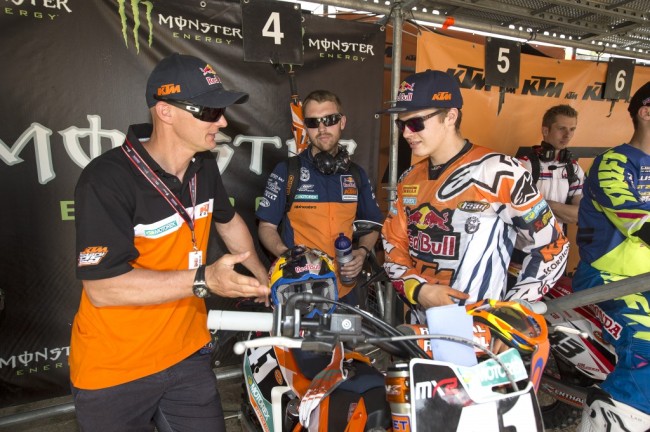 The king of motocross, Stefan Everts, has changed his role within KTM this season and now works with young kids coming into the EMX team instead of managing the MX2 GP team.

Everts of course still works with Pauls Jonass individually in MX2 but working with the EMX riders is a role Everts is enjoying. And with one of his young chargers, Jorge Prado, leading the EMX125 series, and all three riders going 1-2-3 in the last moto in Spain, it is clear that Everts’ plan is working well so far!

We caught up with Stefan to get his take on his new role, his three EMX125 riders as well as Cairoli’s switch to the 450 and Villopoto’s results in MXGP.

Gatedrop: Just starting with your new role this year coaching three very fast kids in EMX125, are you enjoying it?

Everts: Yeah with the young kids it’s quite fun and it’s nice to scout the young talent. It’s been an idea I’ve had over the years which I’ve tried to introduce to KTM but was never the right timing. But I wanted to change my role inside KTM because I had enough of some things and this all fell together. They had already a Jorge signed for some years and Conrad Mewse is in his second season then Natzke is the new guy who I pushed for to bring him from New Zealand.

We have set up a completely new structure, we have one chief mechanic who looks after the bikes, we have a policy of not having high-tuned engines so it’s all based on stock material. The suspension is stock, just modified, stock brakes, stock chassis and the sxs material on the race bikes. This is an important policy because we need to keep the racing on a low budget and show people that it’s possible to do. Our main focus is to look at the riding and develop the kids in the right direction and maybe one day they are ready to step into the MX2 with factory KTM.

Gatedrop: So are you working more on riding technique?

Everts: I have worked a lot on the set-up as far as the bikes go, but now the team is working and everything is there now so I think for the future it will be a bit easier.  But yeah, my role is to work closely with the riders and make sure they have everything they need, as far as the practice bike and goes to to make sure they are happy with the race bike. They have the opportunity to test with the suspension but mainly it’s to focus on their technique, experience and riding and try to help them and show them how to work and point them in a good direction.

Gatedrop: Jorge Prado only turned 14 at the start of the year, he is obviously very talented to win straight away on the 125, what are your thoughts on him?

Everts: I am very surprised, I knew he is a talented kid but he had been injured a lot lately, on the 85 he was unlucky. But this year he made a huge step and is leading (the EMX125 series). He won the first race for the team, he was the last guy I had expected to win a race so soon. I expected Conrad and Natzke to be there. He is a surprise for everyone to be that strong and that fast but he worked hard in the winter, he learns a lot but the work ethic is important at this age. I advised him to put in a lot of long motos and that is the only thing he has been doing all winter. He was putting in 30 minute motos two or three times when he practices.

Gatedrop: Conrad Mewse just had the best ride of his 125 career to get third in the second moto, what has been the stumbling block for him to get to that point quicker?

Everts: I don’t know, last year was a difficult year for him and it maybe went a bit too fast. This year he worked really hard in the winter and he is ready to be up front. He has been struggling with his confidence and his starts, his trouble point is that his starts have not been working out and then he is back in the pack and he gave up a few times. He needs to get his focus down and on the racing and forget about the pressure. I think he puts some pressure on himself but he needs to learn to deal with it. But for me he has the speed, he was putting some fast lap times in that second moto and was catching them. it’s just the starts and if he can dial them in and get his confidence. I think this result will give him a bit more confidence for the next race in two weeks.

Gatedrop: I just spoke to Josiah earlier and he reminds me a bit of Ben Townley, he’s very focused and determined but a nice kid.

Everts: Yeah he is a very nice kid, it’s for him a big adventure to come to Europe by himself. He has a friend who works on his bike who’s there with his girlfriend. But he has no family over so we need to take good care of him. It’s not been an easy start, we have been riding quite a bit in the sand and he has been struggling a lot in there. We didn’t have a lot of time to get ready for Valkenswaard and we knew it would be a very difficult race for him and of course we lost a lot of points for the championship. For me he was for sure a title contender this year, I believed really highly he could wrap this thing up and now we have the surprise of the season with Prado.  We saw a nice battle between them yesterday on track and that’s what I like to see. I put them out together during the week to push each other and bring them to the next level.

Gatedrop: Ben Townley had mentioned that Prado should go to MX2 GP next season. Is that something you have thought about?

Everts: It’s something we didn’t really talk about yet. For sure he will make the step to the four stroke but whether it is the EMX2 or MX2 GP I don’t know. MX2 GP is still a big step for him, he is a small kid and doesn’t have much muscle yet on his body. And to handle MX2 in the World Championship maybe it is a bit too soon. You know everyone wants to rush their career when they are young, but then injuries start to come and things go wrong and they lose their confidence. It’s really not necessary to push.  I always say try not to run faster than the time it’s taking. This is the mistake a lot of kids and parents who are pushing them too much. That is something I really don’t want to do with my boys.

Gatedrop: Just moving to the MXGP class, Tony went to the 450 this weekend, did that move surprise you?

Everts: I don’t know why he did it. He won five years with the 350 and there’s never been a problem. In a way it’s some new motivation for him to race a new bike but on the other end it shows he’s missing the confidence a bit otherwise he doesn’t make the change, that’s how I see it at least. If it works out or doesn’t work out I don’t think it’s down to the bike, it’s not a 450 or 350 for Tony Cairoli because he showed great speed in the past. Maybe the other pushed a bit harder but we will see, the level is high you have to say that.

Gatedrop: If you were a competitor of Tony’s and you saw he was switching to the 450 would you be thinking you are getting to him mentally, that there is finally a chink in his armour?

Everts: If the competition wants to take the option for the championship, now is the time to do it. If you competitor makes a move like that he is not as confident like he used to be. Then really you need to step it up if you are Clement or Max, because once Tony gets his thing back it will be hard for them.

Gatedrop: What were your thoughts on Ryan Villopoto in the first four rounds? Did you expect him to do better than where he was?

Everts: I expected it wouldn’t be easy wins for him. But I didn’t expect it to be that bad, I thought his results would be better but it shows it’s not just something you can come over and win. It takes time to adapt and learn the tracks and maybe take some advice from here because it is different racing. If you are coming over from the US and think what works there works here, it doesn’t. Sometimes you need to be open and make other steps and listen to other people, even when you are the greatest champion in the states. But I admire his guts to come here and do this trip and adventure. I have a lot of respect for that because it’s him against the whole paddock and you need to have some balls for that.

Gatedrop: America obviously doesn’t give the same coverage or respect to GPs, do you think Villopoto racing the world championship has given GP riders more respect in America?

Everts: I think it raised everything for now but the championship for him is over so I think the viewers dropped, hopefully he can be back soon and race at the front and have some good racing. But at some point it will just return to the way it was before.

Gatedrop: Did that ( lack of respect) ever frustrate you when you were world champion, you never really even got a cover on a magazine over there!

Everts: Well I got one in Racer X when I won the three GPs in one day. When I was young it fired me up, but at one point I realised I couldn’t waste anymore energy on it anymore and I just accepted it and I just did my own thing. If people liked me they liked me, if they don’t like me  that’s how the world is. You just have to know your truth and be open and honest to everyone in the world and that’s for me the most important thing that I can still look everyone in the eye.