Interview: Maxime Renaux on his return to racing and expectations! 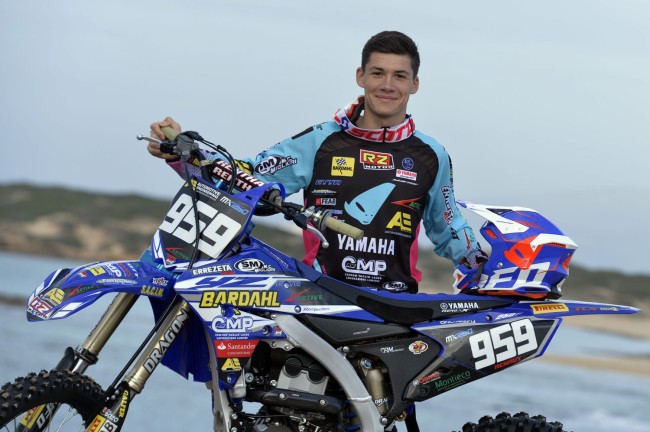 French rider, Maxime Renaux made a return to racing in Italy at the weekend after a tough two years on the sideline due to injuries.

Renaux has signed a deal with the SM-Action Yamaha team for the year ahead and will contest the EMX250 series. Let’s not forget Renaux had the EMX125 red plate before he was ruled out due to an injury meaning Jorge Prado went on to clinch the title, Renaux is very talented.

He reminded us of his talent at the weekend as he put in the quickest qualifying time of his group and put in two solid moto’s too after bad starts.

We decided to catch up with Renaux to discuss a range of topics.

Gatedrop: Maxime, you made your return to racing at the first round of the International Italian Championship, can you talk me through both your moto’s?

Maxime Renaux: The weekend was the first race in Riola. After a good time practice with the pole position, I started around 10th position before I had preparations problems with my googles, it was my fault. So, I stopped in the second lap in the pit lane and lost a lot of time to change my googles. I went back to 28th position and managed to come back to 8th position.

In the final race with the 450’s I crashed in the first corner with another rider. I came back to 13th position which meant I was the 4th MX2 rider.  I had really good speed and feeling all along the weekend but some mistakes put my chances out for fighting at the front.

Gatedrop: You certainly have the talent but after being injured for pretty much two seasons I didn’t expect you to be so fast! You must be pleased with the speed you showed?

Maxime Renaux: I am really happy to be back and feeling good. Since 2 years I didn’t have the opportunity to show my speed with injuries and I just keep working during those years. So I am happy to be here today but I have been working for it.

Gatedrop: Just on the past two seasons, can you remind everyone of the injuries you suffered from?

Maxime Renaux: In the 2016 season I broke my right humerus and had 3-4 months off the bike.  In the 2017 season at the opening round of the French championship, a rider jumped too far over a jump and landed on my shoulder. My humerus was broken in 3 parts on the top and I also had problems with the nerves. I was out for all of the season and around 7 months.

Gatedrop: Just how frustrating have the past two years been? Having to watch the races at home while seeing guys like Mewse and Prado who you were battling with in the 125 class..

Maxime Renaux: It was really hard mentally but I keep on working physically. I was frustrated for sure but my only goal was to be back stronger.

Gatedrop: You moved to the SM Action Yamaha team for the season ahead, how is everything going with the team and where have you spent must your pre-season?

Maxime Renaux: Yes, I have moved to SM-Action Yamaha team. I work in France with my father and I go sometimes to the team – I do 50/50. At the moment all is perfect with the team, good people around me and works a lot for us. It’s like a big family and it’s easy to talk and find solutions with them. I feel really good.

Gatedrop: Have you been riding much with Alvin Ostlund and Simone Furlotti and has that helped you with your preparation going into the season?

Maxime Renaux:  Not so much with Simone because he is injured now and I wish him a good and fast recovery. I have been riding more with Alvin. For sure it helps both of us and we get along well so it’s the best way for progress.

Gatedrop: For being from France you’re very good in sand, perhaps even better in sand than hard pack! Have you done much hard pack riding in the winter and what’s the feeling like on it?

Gatedrop: You’re racing the EMX250 championship this season, was that a hard decision to make as I’m sure you’d love to be in MX2?

Maxime Renaux: I just focus on working a lot now and be as best as I can, never mind if it’s European or world championship even if I would like to ride mx2.

Gatedrop: What are your goals for the EMX250 series for the year ahead?

Maxime Renaux: For sure I want the title but a championship is long and I take it race by race without any pressure.

Gatedrop: Who do you see as being the contenders for the championship?

Maxime Renaux: I don’t know, in the European championship it’s hard to say because there is no limit of age. We will see this soon!

Gatedrop: Will you ride any MX2 World Championship races that don’t collide with the EMX250 series and if so do you know which ones?

Maxime Renaux: I will ride all the MX2 World Championship rounds that don’t collide with EMX250 in Europe.

Maxime Renaux: I would like to thank Yamaha for giving me a chance this year after these 2 difficult years. And thanks to the team for all the improvements they’ve done in all the areas. Also, a big thanks to dragon tek for the time and work they’ve done on the suspension.