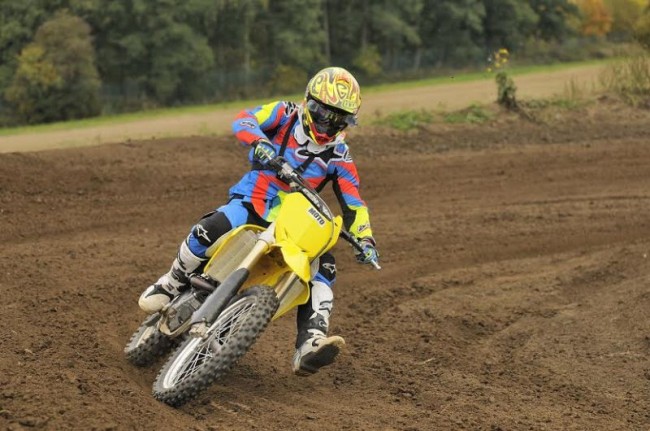 One rider that really stepped up their game in the 2015 season was definitely Josh Spinks. Josh didn’t start the season as well as he would have liked but he seemed to get stronger every race which encouraged him. Josh grew in confidence as the season went on but unfortunately picked up an injury which meant he missed the last two rounds of the British Championship.

However, his results have not went unnoticed and he has landed himself a top ride for the 2016. Neil Prince has seen the potential in Josh and has signed him for the Heads N threads Suzuki team for the 2016 season.

We caught up with Josh to get his take on the season and the opportunity he now has with his new team.

Gatedrop: You had a great season, you must be happy with your riding this year?

Josh Spinks: This season was good for me, I had a slow start to the year as a result of very little riding through the off season. After getting the bike dialled in after the first 2 rounds I was able to build on results and get some top 10 finishes. Towards the end of the season I was fighting for some top 5 positions with a few 6th place finishes, which I was really happy with. Unfortunately I sustained an ACL injury which left me sidelined for the last 2 rounds of the season.

Gatedrop: What would you say the highlight of your 2015 season was?

Josh Spinks: The highlight for me was definitely the Blaxhall Round of the British championship. I grabbed a holeshot in front of Nicholls, Simspon and Frossard and managed to keep the lead for a couple of laps, I just missed out on a 5th at the flag in that race. That round gave me a lot of confidence going in to the second half of the season!

Gatedrop: What areas do you feel you need to improve in order to get better results in 2016?

Josh Spinks: I feel I need to continue working on the deep sand and bettering my technique, also need to brush up on a little stamina and bike fitness to enable me to keep with the top riders for the hole race!

Gatedrop: Did you change anything before the start of the season to improve your results/speed?

Josh Spinks: For the first time in my career I was provided after market suspension, this made a huge difference to my riding confidence. I have a great relationship with SPS suspension and together as well as the Verde team we build a great bike! I think that was the biggest difference this year, in comparison to a stock bike in 2014.

Gatedrop: Do you feel any added pressure now that you have signed on a top British team?

Josh Spinks: The only pressure I have is the pressure I put on myself. I don’t feel pressure from the team, I just aim to give my best in each race I do! And that is all I can do. I race to enjoy myself!

Gatedrop: Have you rode the Suzuki yet? What is your first impression on the bike?

Josh Spinks: I have only ridden the Suzuki 3 times since injury, I like the bike. How the bike turns is especially appealing to me, so once set-up I have know doubt the bike is capable of being up front!

Gatedrop: What are your plans for pre-season? Will you stay in the UK or go abroad to ride?

Josh Spinks: My plan is to be a lot more prepared than last year and get some good quality riding in. I have a great training program in place with Luke Ursell and Seven Three Fitness for my off bike training. Our plan is to stay over in the UK unless the weather decides otherwise. Maybe a couple of weeks in Spain and Belgium!

Gatedrop: What are your goals for the 2016 season?

Josh Spinks: I would like to continue building on my results this year, consistent top 6 positions throughout the year would be nice. I know I am capable of posting top 3 lap times, I just need to put the full package together. Also competing in the MX nationals in 2016 i’l be looking for some podiums.

Gatedrop: A few years ago when you were amateur did you ever think you’d be riding for a good team like Heads N Threads?

Josh Spinks: To be honest during a rough time in 2013 I didn’t think I would be racing at all in 2014, I don’t want to go too much in detail but things at home weren’t great and I had my bike stolen that year. But I managed to gain some sponsorship and put everything I have in to it since then. So I am just really happy to have a great team behind me!

Gatedrop: You must be excited to have the opportunity to work with Neil Prince?

Josh Spinks: Very excited to work with Neil for the 2016 season. He has been there and done it himself and also worked with a lot of GP riders during the early stages of there career. He knows the importance of a good bike and I have no doubt he can help me build on my results!

Gatedrop: You have rode competed a few EMX300 races in the past, will you contest any this year or plan to do any MXGP races?

Josh Spinks: The plan is to do an MXGP this year if all is going well on the lead up to the events. It would be great to race Matterly on a track I enjoy and mix it up with some GP riders!

Gatedrop: what’s your thoughts on the British format next year?

Josh Spinks: I think the format will be so much better. the 3 race format was far to busy on the day and gave no time to do anything between races. Also slightly longer races brings fitness in to play. A smart move in my opinion.

Josh would like to take this opportunity to say a big thank you to his private sponsors. SPS racing Suspension, SevenThreeFitness, Kobold, 1stmMX, Fatcat Motoparc and Fuel10yK.