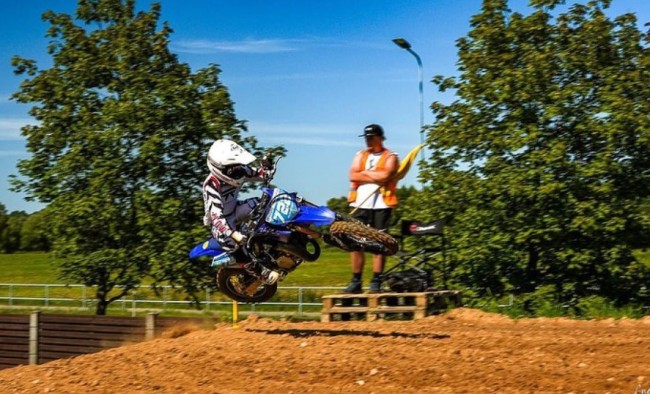 Since Pauls Jonass broke into the Motocross scene there’s been a lot more talent emerging from Latvia and it’s always nice to see riders from different countries make a name for themselves.

The latest young Latvian to keep an eye on is Jekabs Hudolejs who will make the move up from the 65cc to the 85cc in 2023 and hope to have a good rookie season on his new machine.

We caught up with Hudolejs to discuss his short career and more.

GateDrop: Jekabs, let’s start with last year, you raced the EMX65 at Loket, the day started well going fastest in free practice. You finished 5-7 in the moto’s for seventh overall. Can you talk me through your day and where you happy with your results?

Hudolejs: My day started well in free practice I showed the fastest lap. I realized that I was fast, but I also started thinking about the result. I didn’t manage to make a good lap in qualifying because I only thought that I wanted to be first. I finished the first race well, I’m not satisfied with the end of the race because I fell from 3rd place to 5th. In the second race, I had a bad start around 20th place, but I moved up to 7th place. 7th place overall. I know I can do better.

GateDrop: What was it like racing the same weekend as the best Motocross riders in the world with the MXGP riders also in action?

Hudolejs: I was very happy to be with all the best in the world. I had the opportunity to meet many racers.

GateDrop: What are your plans for the 2023 season – I believe you’ll make the move up to the 85cc?

Hudolejs: The main thing is that I would like to qualify for the final of the European Championship. Also a good start in the Dutch competition.

GateDrop: Have you had many laps on the 85cc bike yet and do you enjoy it?

Hudolejs: I started riding the 85cc in the middle of September and we practice three times a week. It is very nice to ride, it’s a much more powerful motorcycle.

GateDrop: Coming from Latvia, do you find it difficult racing in the EMX class and racing against the best in Europe? I imagine the level is a lot higher than at home…

Hudolejs: We often participate in competitions in Estonia because there is stronger competition there. The World Junior Champion comes from Estonia.

GateDrop: What’s the sport like in Latvia? I think Pauls Jonass has really helped the sport there and now there’s more Latvian talent coming like the Reisulis brothers…

Hudolejs: When Jonass started riding in the World Championship, motocross became more popular in Latvia. I train a lot with the Reisulis brothers and learn a lot from them.

GateDrop: Growing up which riders have you looked up to and why?

Hudolejs: I really enjoyed watching Ryan Dungey ride. He always managed to do everything to become the champion sometimes without even winning the competition. Now I like Dylan Ferrandis.

GateDrop: What are your goals for the 2023 season?

Hudolejs: I would like to qualify for the EMX85 finals in the 2023 season. More getting used to the powerful motorcycle.