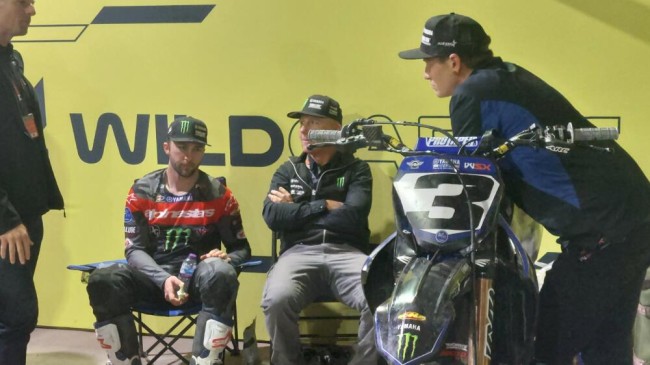 We caught up with Eli Tomac to get his thoughts on his British GP win and the Cardiff experience:

Eli, Yet another win for you this season, it seems to be going pretty perfectly for you, Grand Prix supercross winner, how did that feel and how was the whole experience?

It was a great weekend, overall feel it was really good. Just from the town and the stadium, what’s cool about here is how close you to the town, the hotel is right here, it’s a cool environment. The fans were great, they were into it, they were loud. It was a great night of racing for me. I started off a little but slow but then for the three mains, I came more alive, yeah man, it was a good weekend.

Did you get a better feeling with the track as the night went on or what was the biggest change?

Yeah, I warmed up and just got better, I would say I was just a little bit off in that first heat race and the superpole was close, but didn’t hit the big jump!

Was that on your mind, obviously Josh done it but then once Ken done it were you like, ‘oh, I might have to pull the trigger here!’

It was on my mind, thankfully, it was faster but it wasn’t like to where I was losing all the time, I wanted to do it for the fans but I didn’t man up!

How did you find the fans I think for you and Ken and probably Chad Reed, i think they were as loud as they were for Dean Wilson and Max Anstie, 35-40,000 a lot of them probably came to see you because they don’t get to see you race, it must be a nice feeling to have that support?

It’s a cool feeling, it was cool to see how many people were there. This was a new deal for us and it was a good showing.

Does this tempt you to race Australia at all or change plans for next year?

I don’t even know how exactly it works or if I even can, as of now I have plans of going there.

And what’s next for you now, are you actually going to get a couple of weeks off to rest?

I get a couple of weeks off then I go and do the Paris supercross.

Get the first part of our Eli interview below as we talk about his career: