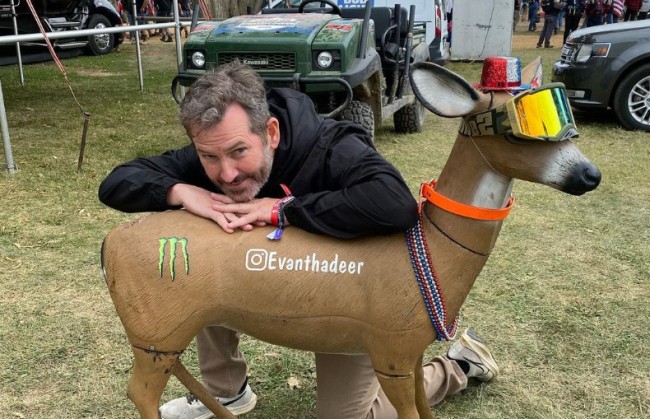 We caught up with head of Racer X and MX Sports, Davey Coombs, at the MXoN to learn more about the new AMA SuperMotocross World series and we also learned from Davey about a mega new race idea that is being planned, that will hopefully see the top MXGP and AMA riders in one race!

They (Feld SX promotoer) decided after 20 years it was time of not being able to expand supercross internationally because it just doesn’t really work, so they decided not to do the FIm thing anymore so we could get a common rule book and then the next logical step was what if we came up with a new championship, we want to work on a project together but motocross is working great, supercross is working great, you have your thing we have our thing but what if we went together in middle with something new…Dave started thinking our sport doesn’t have a play-off from Nascar to Football to baseball, Basketball, Hockey, everyone has a play-off, so if we went togetherand did these events what if we did a third championship and made it a bonus championship.

The next thing was our TV deals came together for 2023 and beyond so let’;s expand just a little bit and do these three races and this play-off. All 7 of the OEMS, i wouldn’t say bought into it but all agreed to come and participate and everyone’s excited. It’s not going to change what supercross is right now, the Monster Energy AMA supercross championship is going to be the best supercross rider in the world, the Lucas Oil Pro Motocross champion, will be the best guy in that series, those won’t have anything to do with each other. It’s this third thing that will take points from each to seed the guys, they will race together in all three rounds. We haven’t had a new championship in America for a long time and we thought a short, play-off style, unique faciilities and so far the reception has been great.

We take the points from supercross and motocross to seed the top 20 and then we will take ten more, two seperate classes – 250 and 450.

We haven’t got to that point (of having GP guys race) right now the focus is the AMA supercross series and AMA Motocross series. We know the time of it, they will still be finishing the FIM World Championship and we don’t want to have a situation where we are messing with MXGP and what they have going maybe if this works, we do something after the des Nations.

David Luongo and I are working on something really, really cool, it won’t happen in 2023 because there are things to work out like how it would work, but I can tell you we are both extremely excited , it’s something everyone has always wanted, everyone motocross fan as wanted. You don’t want to mess with the MXoN this event works, it’s a celebration.

If we can work out a way not mess with this race but have something totally different that we can fit it into MXGP and AMA Pro Motocross, that would not be taking away from either, it would be a second celebration every year.

Eric Geboers and I watched the Anaheim supercross, none of us coudl get into the Knothole club so we ended up in the stands buying beers, and Eric, who I loved, and Eric is like, ‘it is my dream to have a race to bring Pro Motocross and MXGP together at Namur and one half of the track will be all AMA MX sponsors and the other half of the track will be all MXGP sponsors and we bring the top 20 riders in either class and I’m like, ‘ I think that’s a great idea but it’s crazy!’ At that time the relationship with what was Youthstream and MX Sports was very different.

After Guiseppe reached out in 2016 after Maggiora, we have started working together and now David and I have become really good friends and we see a lot alike as fans. The systems are different and it is what it is and we are the way we are. When Eric Geboers died, I remember writing a memorial for him that that was his dream to have this race and, if we ever did have this race, the winner gets the Eric Geboers cup and if this works out, that’s what’s going to happen.

And we all as fans have had that thought, but I have never heard it articulated so well optimistically and so emotionally as Eric that night. He was like, ‘ you must make this happen, you must make this happen.’ Again, i thought yeah, when hell freezes over, but things changed for the better so we are re-visiting that. It is just on the drawing board, there is a lot to worlk through but how bitching would that be?

Listen to the full interview below: