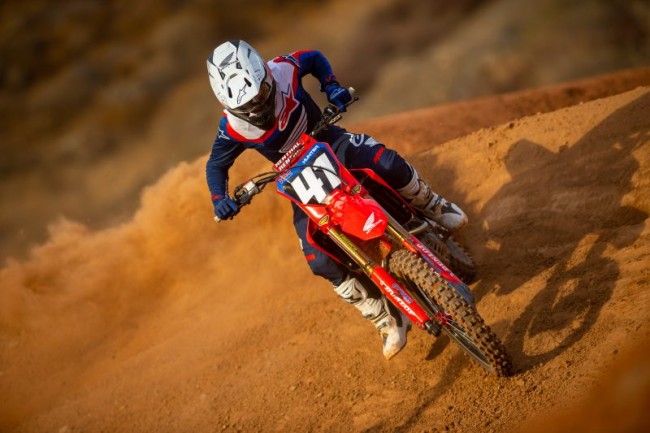 A very happy Hunter Lawrence has revealed he has made major improvements to his health, nutrition and feels like an all-new rider after discovering his body was “eating itself” last season.

The factory Honda rider believes that was also the reason why he got hurt so much but thanks to help from Johnny O’Mara, he believes he can now finally show his potential.

“Just super happy to be fit and healthy and can’t wait to get going. Everyone is eager to go racing, it’s going to be good,” said Hunter on the pre-season press conference. “(I’m a) Completely different person. I strongly believe my nutrition and health side of things – my body is dialled in now. Injuries are all taken care of and good. I feel great on the bike, the team has helped out a lot and we have a great motorcycle. I cant wait to get going , just really excited because as I said I just feel all-new kind of. In comparison with Salt Lake (last year) , it’s not even the same.”

“We dug into it a lot, pretty deep on that after last year as we just felt like there was a lot of things going on that didn’t really make sense,” Lawrence continued on his health revelations. “My trainer Johnny O’Mara was quizzing me out and stuff and we really dove deep on it and figured out a lot of things with my body. It was pretty messed up, it was basically cannibalising itself and eating away at itself with all the muscles and tissue and stuff so hence any crashes that would happen would result in injury due to that. Any training I’m doing my body is rebuilding itself and building muscle gaining fitness whereas previously it was beating itself up and wouldn’t recover. now, looking back on it, it’s kind of mind blowing how I could even make the motos in outdoors and stuff to how I feel now.”

On who he has been riding with in the build-up to the new season, Hunter said Jett has been his barometer. “I’ve been riding with Jett when he is back here, we have Jason back now. I went out to Cali briefly for a short week just testing with the team and that’s been pretty much it, just benchmark off my brother. Out in California we went out to two public tracks and I think McAdoo and some of the Star boys where out there at those tracks and stuff, so it’s good it’s a different atmosphere out there than back home. it’s been a really good pre-season, can’t complain about anything really.”

Hunter came to the US as the GP star but with his injuries and Jett’s speed and personality the eldest Lawrence has been pushed into the shadows, now finally, the US might see the true level of Hunter Lawrence.