Herlings, Cairoli and Prado on Maggiora 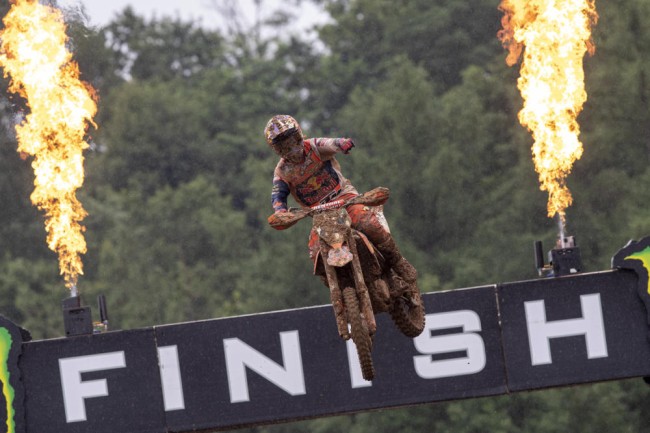 The steep hills and hardpack of the historic Maggiora Park circuit was able to welcome FIM World Championship racing for the first time since the 2016 Motocross of Nations and for the first Grand Prix event since 2015. Warm and showery conditions created a slick, rutty and finally muddy affair around the narrow and tricky Italian layout.

Jeffrey Herlings ruled Timed Practice for his first Pole Position of the season by almost four-tenths of a second over Tim Gajser. Jorge Prado was 3rd fastest. Winner of the last round in the UK, Tony Cairoli, in 7th. It was Prado who made the better start in the first race and circulated behind leader and winner Romain Febvre in what was a static affair. Cairoli was 3rd and Herlings had to fight back to 6th after he initially lost time removing a stone wedged into his rear brake system. A brief thunderstorm just before the second moto dumped a lot of rain on Maggiora and ensured the final race of the day would be a ‘mudder’.

Herlings made the best start and followed Glenn Coldenhoff for 11 of the 17 laps. He passed his countryman and won by almost seven seconds. The 6-1 scorecard meant he tied on points but the second moto win defined the Grand Prix ranking. Also equal on 40 points was Cairoli who had to deal with broken goggles before finally ditching the eyewear. Despite the disadvantage, Cairoli was able to ride to 3rd and his 3-3 gave him a second consecutive podium appearance. Prado was also running with the leaders but lost two places inside the final two laps and his 2-7 cast him to 4th spot overall.

Red Bull KTM Factory Racing have all three of their athletes in the top five of the championship points table and the crew have owned two of the three rounds this year.

Jeffrey Herlings: “The first moto felt like a disaster. I didn’t know what was stopping the rear brake so I had to sort it out and lost places and around twenty seconds. I then had to make a late moto charge. I was bummed about that and really wanted to go for the win in the second race but the rain fell so hard just before the start. It was a bit unexpected, and we had to make a last minute decision about tires and googles. My starts were off a bit today but the second moto was OK and I got into 3rd, where I saved my goggles for a while. I had a little gap to Glenn and I knew coming to the lapped riders would be a moment where you can lose but also gain a lot of time: you have to be a bit lucky. So I attacked at that moment and it led to the ‘overall’. We closed a lot of points in the championship so the day started and finished in an unlucky and lucky way. It’s good to head into Oss with a confidence boost. I want to give-it-up to the Red Bull KTM team and the job they did, the bike was excellent.”

Tony Cairoli: “I’m happy with the podium but not so much with the second moto because I had the speed to ride at the front. My roll-off broke due to a stone and I had to take off the goggles. The guys pulled away and I could not pass. Eventually they were gone. I’ve been training quite a lot in the mud recently, so my feeling was good here. I’m really looking forward to the sand races now. It’s my favorite ground. Hopefully we can use these two weeks to build up some more conditioning and be at the front again.”

Jorge Prado: “Overall P4 and we are not too far away from 1st place in the championship, so from this perspective the GP was quite OK. I was feeling quite good on the track and it was tough with plenty of bumps and ruts. We had a really high rhythm in the first race but the second was just a mudder. I got pushed a bit wide in the second corner. I was riding in 5th for the whole moto but with two laps to go I made a couple of mistakes that cost me two places and I lost the podium like that. I’m really unhappy with my last three laps. I couldn’t get to the point of making the extra step to force a pass. Instead of holding the position I just lost it.”

Dirk Gruebel, Team Manager: “Jeffrey started the GP quite conservatively but then had that issue with the stone in the rear brake and it seemed to get him quite angry! He then found two seconds a lap to close back to the guys and return to 6th, which is where he was until he had the mishap. He pushed hard and it paid-off at the end of the day. The second race was a complete gamble with the weather, the rain, the heavy mud and people struggled with goggles…but Jeffrey rode steady and won that moto. A 6-1 was good enough for the overall win and it’s great for him, his head and the team. We can see that Jeffrey’s confidence is growing and that’s really nice. He started the season in a solid way but this is the first win and it’s important.”