Hakon Osterhagen on his EMX250 victory in Sweden 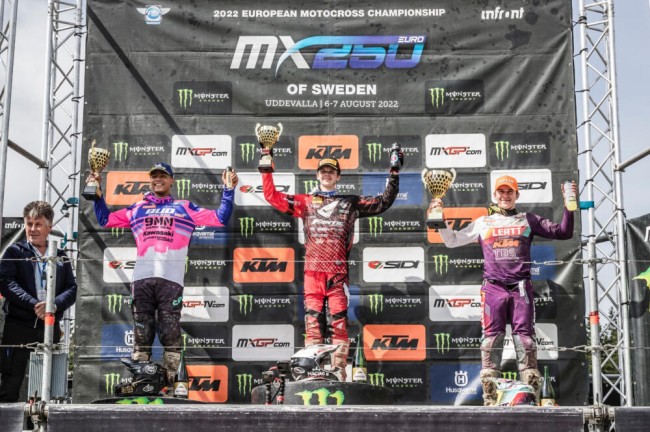 The European Championship was back to action after teams and riders took a short break. Riders gathered at the Swedish track of Uddevalla, but Nicholas Lapucci missed the event because of the injury previously suffered in Czech Republic.

Osterhagen starred in the first moto and after pulling away at the start, he took the lead of the race. The Norwegian rider was phenomenal and thanks to his impeccable performance won Race1. Tondel faced a tough start but despite it he was able to move to the fourth place after the first lap. When Cornelius was trying to keep up a solid race pace he crashed and was forced to abandon the race, but luckily the rider did not suffer any physical injury.

The Fantic Factory Team Maddii riders were the authors of two phenomenal performances in the second moto, where they took the second and third position as the starting gate went down. Hakon chased the race leader and tried to overcome him but did not make it as the maneuver was too risky, so he eventually classified second. Tondel’s performance was solid and allowed him to finish fifth.

Thanks to these excellent results Hakon Osterhagen won the GP of Sweden, while Tondel did a great job too and is still battling it out for the title.

The young riders enrolled in the European Championship EMX125 came home with great results and showed their potential with their Fantic XX 125 machineries one more time.

In the qualifying, Fueri and Valk classified fourth and fifth respectively.

Valk did not enjoy the Swedish track that much and despite the feeling was not the greatest, the rider was wise and smart, and his strategy rewarded him with the fifth place. Fueri was the protagonist of a demanding start and crashed while trying to work his way up. Despite everything, Alexis classified seventh.

Great start for Alexis in Race 2. This allowed the rider to take the second spot and hold the position till the end of the race. Cas Valk tried his best to conquer the title with one race to go, but he never found the right occasion to overcome his main rival Resulis so Cas had to feel happy with the fifth place.

Alexis Fueri mounted on the third step of the podium and is once again second in the Championship. Cas Valk remains the red plate holder and still has a good margin over his main rival. Next week, in Finland, riders will compete for the final race and will battle it out for the final victory.

Hakon Osterhagen: “What an amazing feeling! It felt like this was my home GP and the way fans supported me was simply terrific; not to mention the fact that winning the GP knowing that my family and friends were there, is something fantastic. Everything was perfect, both my Fantic XX250 and the track. I’m very happy with today’s result”.

Marco Maddii: “It was a positive weekend for the team. The best result was Hakon’s victory – he was perfect. Too bad for Tondel who made a mistake in the first heat but he’s still battling it out for the title. I’m also happy for the riders enrolled in the EMX125: Cas strengthened his position in the Championship and Alexis is second; we’re very close to our goal”.