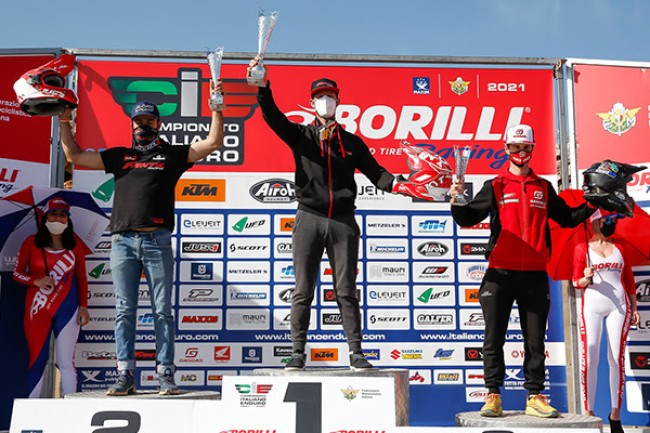 The small Sicilian village of Custonaci in the province of Trapani hosted the second and third act of the top Italian championship and the Fantic riders have been protagonists in a very demanding and difficult race.

The Fantic riders dominated and amazed last weekend during the two days of competition on Saturday 27 March and Sunday 28 March. The organizers of the second and third act of the Assoluti d’Italia di Enduro have created a race with three very demanding special tests, both with hard and rocky terrain and at the same time very scenic.

The Fantic XE 125s of our three factory teams once again proved to be reliable, competitive bikes and finished the double day of racing without any problems. In the 125 class former cross rider Davide Guarneri clearly excelled and won both days of competition, dominating since from the first special test.

Good performance by the home rider Giuliano Mancuso (Fantic Darpa Racing Team) who collected an excellent second final position, the result of two second places of the day. The week-end in Custonaci for Riccardo Fabris was perfect. The Veneto-based rider won both days of competition while showing a lot of stubbornness and determination.

Next appointment in about a month in Piediluco in the province of Terni on Saturday 24 and Sunday 25 April, where the fourth and fifth act of the Assoluti d’Italia di Enduro will be held.

JED ETCHELLS: “It was a complicated weekend but I will definitely make up for the next appointment”.

DAVIDE GUARNERI: “Another important victory for me and for the team that is working hard. Now focus on the the next challenge”.

HARRY EDMONDSON: “Here in Sicily it was an excellent training in anticipation of the world championship”.

RICCARDO FABRIS: “I am happy for the double victory obtained here in Custoanci, now we continue to work hard to get on the top step of the podium again”.