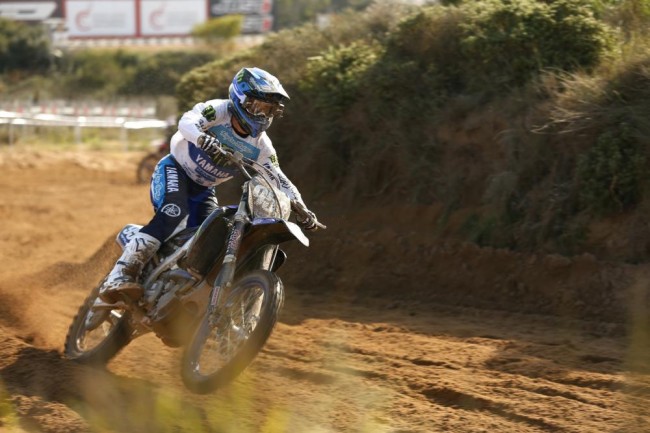 Mixed feelings in the Monster Energy Yamaha Factory MX2 Team after the opening race in Riola Sardo, Italy. Happy with the victory of Jago Geerts in MX2, dissapointed with the injury of Maxime Renaux, who dislocated his left shoulder.

The European motocross season kicked off in Riola Sardo, on Sunday. The Monster Energy Yamaha Factory MX2 Team arrived in Sardinia with two of their three riders: Jago Geerts (20) and Maxime Renaux (20). Thibault Benistant (18) stayed at home with a broken collarbone. The Frenchman will be joined in the infirmary by his compatriot. Renaux crashed during time practice, Sunday morning and dislocated his shoulder. Maxime will visit his doctor on Monday, to see exactly how much damage there is.
Team owner Hans Corvers: “We have three riders, and already two of them are out with injuries. Not the start of the season we were expecting. Luckily, the FIM world championship only starts on May 23rd in Oss. Thibault and Maxime still have enough time to recover.”

First victory
Jago Geerts suffered from arm pump at the beginning of the MX2 race and decided not to rush things. The vice world champion took his time to find a good rhythm and followed the Italian Lapucci, who got the holeshot. Three laps from then end, Geerts decided to go for the lead. His first attempt, was the right one. First victory of 2021.

Geerts got a good start on his YZ250FM in the Superfinal, in which he had to battle against the MXGP-riders on their powerful 450-bikes. Unfortunately, the Belgian stalled his bike – when riding in sixth place – a few laps later and dropped to P13. Geerts regrouped and nicely managed to finish in eighth place.

Geerts: “It felt great to race again. Even if I suffered from arm pump. It’s a reoccuring problem in the beginning of the season. So, nothing to worry about. In this preseason races it’s important to see if we are going in the right direction. The answer is: yes, we are. Both the bike and myself. I’m staying in Sardinia this week to train and test some more things on the bike. On Sunday I will race again in Alghero.”

Renaux: “I immediately set the fastest time and went for another fast lap. But I made a small mistake on the table top and landed a bit to far. I was thrown over the handlebars and dislocated my left shoulder when hitting the ground. I will visit my doctor tomorrow morning. I don’t think I will need surgery, because I don’t have that much pain and the physio was able to put my shoulder back in place again pretty quickly.”