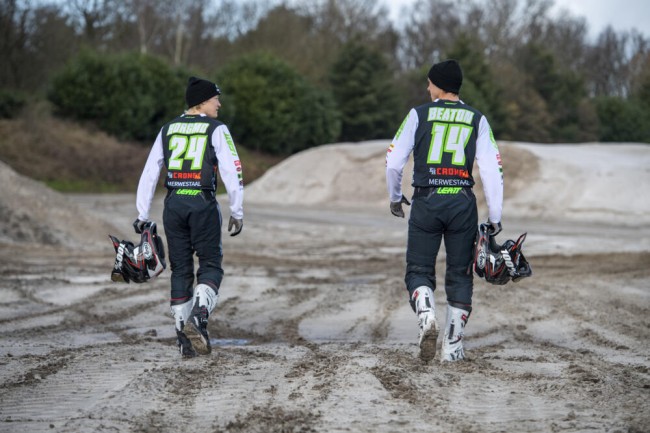 F&H Kawasaki enters a new chapter this season as, for the first time since its creation seven years ago, the team will contest both MX2 and MXGP classes of the FIM Motocross World Championship.

The Dutch-based team has enjoyed success in the MX2 class, claiming the European title in 2019 and GP podiums every year since they entered the World Championship in 2018. For the first time this season the team will have one rider in each of the MX2 and the MXGP series, a new development which is welcomed by everyone in the team. Norwegian Kevin Horgmo joins the team for the first time in MX2, while Australian Jed Beaton returns for his rookie year in MXGP.

“The entire family took the decision to race two classes; we feel it will bring a fresh wind and new opportunities and we are really looking forward to the challenge. We had a great off-season; Jed is back with us and we are very optimistic, together with Kawasaki, that we can give him the opportunity to race up-front on the KX450 because he is a very talented rider. We achieved MX2 podiums with him, and we are happy to give him this chance,” explained team manager Nathalie Fase, who runs the team alongside her father Harry and is enthusiastic after the short winter break.

“With riders in two classes it will be different. We will need a new approach but we have less riders, going from three to two, so we can still focus on both; maybe it will be even better than with all riders in one class,” she added.

Marc de Reuver, a former GP winner who has been coach to the F&H team riders for several seasons, is happy about the preparation with both riders: “It’s going well; it’s even been a little less hectic than in previous years because we now have one MX2 and one MXGP rider so the focus is a little different. When we came back from Turkey last year we had a team meeting, and Harry the team owner suggested the idea to have one MXGP rider and one MX2 rider in 2022. We have had several really good years in the MX2 class and achieved good results but I prefer this solution; it’s a lot less stress.” Marc has already been acquainted with both riders for several years: “I have known Kevin already for a long time; in 2016 he was racing the EMX125 while I was also involved in a team racing that series so I saw him riding. Like most of the guys who are racing at the front in the EMX classes he has the talent to get good results and just needs everything around him to be in the right place. I’m confident for him; it’s coming, as we could see in the pre-season races. I like to work with riders who deserve a chance, and he really deserves it.” Marc is also enjoying working again with Jed Beaton, the man who secured the team’s first GP podium in 2018. “Me and Jed are good friends and I like to work with him. He has a good character; he never complains, he’s a hard worker and it’s good to have him back with us. I’m really happy.”

For Harry and Nathalie Fase, who have both been highly enthusiastic about motocross for many years and who also run their own business outside the sport, a new exciting era commences this weekend when the gate drops at Matterley Basin for the first of twenty rounds of the 2022 FIM World Motocross Championship. After two tough seasons due to the pandemic GP racing returns to the two-day schedule this year and the F&H Kawasaki Racing Team will be present with all of their long-term partners.

“We keep the same partners; we have a strong and solid base which we have built since day one of the team. We have so many loyal partners and we don’t like to change; If it clicks it clicks and, even with the obstacles created by Covid, everybody continued to have faith in us and everyone has been really loyal on both sides during this difficult time. Now we can’t wait for the new season to start; to meet and work again with our partners at the races,” concluded Nathalie, who was pleased to see both of her riders battling for podiums during the pre-season races.

Kevin Horgmo: ”It was a short off season this year, but we had 4 good weeks on Sardinia and 2 preseason races which was good. It’s a good group of people working together in the team, and made me comfy on the Kawasaki already after some weeks of riding. Really eager to get to the GP’s!”

Jed Beaton: “The off season went well; we headed to Sardinia which was a first for me. I really enjoyed it there was a nice little island with many tracks, its feels good to be back on the F&H Kawasaki. I think the bike suits me really well and I’m adapting to the 450 nicely, I’m looking forward to the season ahead with goals of improving every round on my results and staying healthy all year!”