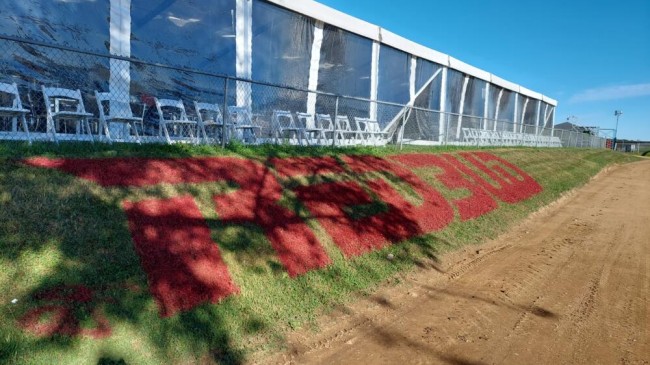 It was a busy day with press conferences galore and a builing atmosphere at a beautiful circuit full of motorhomes and fans already.

We got to speak to Ricky Johnson to get his thoughts on his MXoN memories after he spoke to the media about the watches he will be presenting to the overall class winners:

The rider press conference is always an interesting gauge on some riders and the biggest take away is that a lot of teams have big ambitions to podium or win!

Eli Tomac and Chase Sexton both gave the impression that if they ride the pace they do at a US national they should win but Glenn Coldenhoff in particular seemded very motivated to run up front and help the Netherlands go for the overall win – that is certainly their goal!

Likewise France, who had Dylan Ferrandus saying he was bike to 100% and feeling like he did back in 2021 when he won the title after two good weeks practicing. Maxime Renaux was also motivated to run at the front. France believe they can challenge America for the win just like Netherlands.

Australia are quietly confident of a podium but want more although Jett did say he found the 450 harder to set up compared to the 450, but word is both he and Jago Geerts are flying on thr 450s.

Belgium have a somewhat underrated team but the team are going for top 5 and want a podium in what will be Jeremy van Horebeek’s last pro race.

It also might be Antonio Cairoli’s last race too and he adamitted part of the reason he raced in the US this year was to get some bike time ahead of getting to run the number 1 at the MXoN at Red Bud. Expect an improved Cairoli compared to his AMA National races he sounds motivated and all three riders believe they can podium as a team.

GB manager Mark Chamberlain is also looking for a podium as are the riders who were in good form in the pressure with Searle (tongue presumably firmly in his cheek) saying he was scared of Larocco’s leap, and Wilson insisting he has had his eyes on the Nations all year long with Anstie excited to get back racing a 250.

It was then time fpr Triumph to announced they are going MX2 world championship racing in 2024 so we caught up with Ricky Carmichael to hear about his involvment:

After that it was the riders presentation and the noise from the fans was epic and an indication of just how atmospheric and patriotic things will be on Saturday and Sunday – it’s race time!