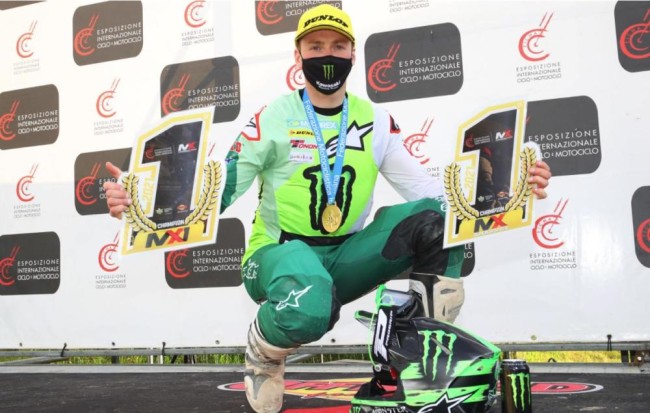 Romain Febvre and the Monster Energy Kawasaki Racing Team captured the first two titles of the European motocross season as the Frenchman raced to both the MX1 and International Italian titles.

The twenty-nine-year-old from Epinal in the Vosges region joined KRT team colleague Ivo Monticelli in a 1-2 start for Green in the MX1 race and the duo immediately distanced the field by four seconds before settling into a comfortable rhythm around the rapid Mantova raceway. Febvre took over the lead from his Italian teammate on the fifth of sixteen laps to race to an unchallenged victory and secure the MX1 series title. Monticelli, still rebuilding his fitness after a winter operation, relinquished second two laps from the finish but remained best Italian in third. Febvre immediately moved to the front on the opening lap of the SuperFinal, resisting all challenges to eventually cruise home fourteen seconds ahead, sealing a dominant performance in the International Italian Championship with two victories and one second place in the three-race-series. Monticelli, caught by surprise when the gate fell early, confirmed his growing confidence on the KX450-SR by charging through the pack from twelfth on the opening lap to again finish third; the performance lifted him to fourth – and best Italian – in the series.

Romain Febvre: “It was another good weekend with again two good starts. We have worked a lot on this point and we can see that we are strong compared to the other top riders who have also competed at these events in Italy; this is very positive. The speed is good and, although I still suffered a little with my forearms, I had less troubles during the SuperFinal; now we have some time in front of us to finalize this preparation. Everything is going really well in the team together with Ivo. He is a cool character and, even though we ride in the same category, there is no rivalry; we are working in harmony and it is super nice to work in these conditions with the entire team.”

Ivo Monticelli: “I already have such a good feeling with my Kawasaki even though I have only been on the bike for two months. We tried some more new settings this week and they worked well for me; I have an even better feeling than before and we saw this with second fastest time in practice this morning. The first start was really good with the holeshot! I always get arm pump in the winter months and Romain passed me, then Horebeek at the end. The gate dropped really early in the SuperFinal and I wasn’t ready. But I was happy with my speed; I started around fifteenth but I immediately found good speed. I tried to catch Jeremy for second at the end but I didn’t go over the limit. I am really enjoying working with the team; they help me a lot. My thanks to them. It was nice to see my family this weekend for the first time in four months, and now we return to Belgium to continue our training. “

Roan van de Moosdijk of the F&H Racing Team landed pole position and took second place in the MX2 event, his 2021 race debut. The Dutch youngster emerged seventh from the tricky Mantova first turn but was soon fifth and, advancing one position per lap with the fastest lap times despite racing in traffic, had taken over second place within five laps. The deficit from the opening two laps meant however that the race leader was already out-of-sight and, with no championship at stake, VDM settled into a comfortable rhythm to take the chequered flag second. He completed his opening race day of the season with a fifth-placed finish against the 450s in the SuperFinal.

Roan van de Moosdijk: « Today was our first race with the 2021 Kawasaki, and already in the timed practice session we could take the pole. My start was not good in the MX2 race, around tenth position; I soon came back to second but then I got some arm pump and couldn’t close the gap to the leader. In the SuperFinal I found good lines and came fifth against the 450s. I’m happy with the bike and the suspension worked well but we now need to improve the starts.”