Factory Yamaha riders on heading to Russia – Geerts confirms he will race! 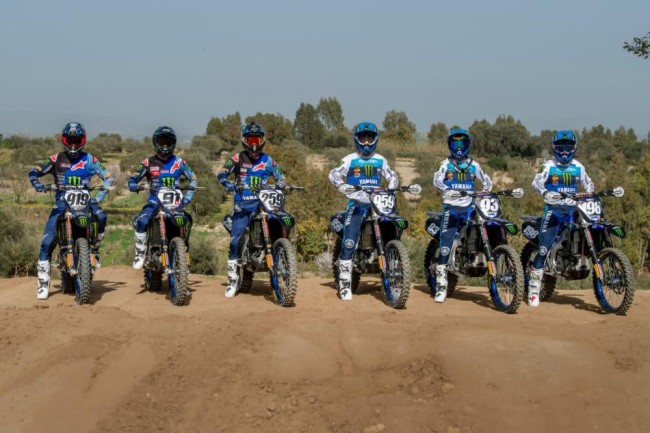 After an extended off-season, the Monster Energy Yamaha Factory MXGP and MX2 teams are motivated to start their 2021 campaigns with the opening round of the FIM Motocross World Championship set to take place on the coastline of the Black Sea in Orlyonok, Russia, this weekend – June 13th.

Looking forward to a gradual return to normality, both Monster Energy Yamaha Factory MXGP and MX2 teams are excited for the next six months of FIM Motocross World Championship racing. Starting the year at the scenic, hard-packed, fast and hilly Orlyonok venue, YZ450FM mounted riders Jeremy Seewer, Glenn Coldenhoff and Ben Watson, and YZ250FM mounted stars Jago Geerts, Maxime Renaux and Thibault Benistant are energized and ready to take on the jam-packed 2021 MXGP calendar that currently consists of 19 rounds and 38 races!
Spearheading the title chase inside the premier class in 2021, four-times FIM Motocross World Championship runner-up Seewer has proven he has the pace to challenge the title. The 26-year-old Swiss rider has completed two pre-season events in France, in which he stole a race win from the best in the business and enjoyed the view from the top step of the podium. In 2020, the ‘91’ took his YZ450FM to maiden race and Grand Prix wins. Determined to add to his incredible list of achievements, consisting of 69 top-three finishes and 38 podiums, Seewer is focused on maintaining his astonishing record of consistency. Throughout his eight years as a professional racer, the reigning world number two has not missed a single Grand Prix! The 2021 MXGP season opener in Orlyonok, Russia, will mark his 129th consecutive Grand Prix start.

Kitted in Yamaha Factory colours for the first time in his career, Coldenhoff has had a positive off-season where he has worked hard to adapt to the YZ450FM. The 30-year-old Dutchman arrives in Russia confident and driven to add to his stellar list of Grand Prix accolades, including five Grand Prix wins, 39 top-three finishes, and 19 podiums.

Joining Seewer and Coldenhoff on the works YZ450FM, young MX2 graduate Watson is thrilled to enter his rookie MXGP season with the full support of the Monster Energy Yamaha Factory MXGP team. After an incredible end to his 250cc career where he celebrated two race and Grand Prix wins consequently extending his podium tally to nine, the recently turned 24-year-old Brit is set for a buoyant 450cc debut.

In MX2, the Monster Energy Yamaha Factory MX2 teams is poised to defend Yamaha’s Manufacturer’s title. Presenting Yamaha Motor Europe’s strongest ever MX2 squad with two of the top-three finishers in last year’s FIM MX2 World Championship, Geerts and Renaux, and strengthened by the addition of the 2020 EMX250 Champion, Benistant, the Belgium-based team is aiming for the top step of the podium.
Having finished third overall in 2019 and second in 2020, Geerts is determined to hit the reset button and go one better this season. The 21-year-old Belgian has suffered a minor setback after he twisted his left knee during a pre-season event in France last weekend. Still, following much thought and a detailed medical examination, the 93 has decided to race and collect as many points as possible at the Orlyonok Circuit – the same venue at which he won his first world title, the 2016 FIM Junior 125cc Motocross World Championship!

Eager to celebrate a successful 2021 campaign, the current world number three Renaux is hungry for more race and Grand Prix wins. The 20-year-old Frenchman has had an incredible off-season, and heads to Russia in the best form of his career.

After winning the 2020 EMX250 Championship onboard a GYTR kitted YZ250F, Benistant has shown incredible pace since his MX2 debut at the end of last year. The 18-year-old impressed during his three wild-card appearances where he finished two races inside the top-three, and remains poised to fill his boots as ‘the next big thing’ as he lines up on a fully-fledged YZ250FM for his first full season in MX2.

Following the one-day format that was introduced as a result of the Coronavirus pandemic in 2020, each class will have a 45minute practice session followed by two points-paying races. MX2 Race 1 will start at 12:15 followed by MXGP Race 1 at 13:15. Gates will drop for MX2 Race 2 at 15:10 followed by MXGP Race 2 at 16:10. All times are local GMT+3 time zone. All sessions can be watched live on www.mxgp-tv.com.

Jeremy Seewer
Monster Energy Yamaha Factory MXGP Rider
“It has been a long time off! It will feel weird to be back, but I am feeling good. I used the time off well, to improve the bike and myself. I am feeling good and confident and it helps we are going to Russia, I love the track there it is exactly my kind of track. I love it there and I like to do there. I will go there with the goal of collecting good points, obviously I want to be on the podium and I will always try to win if I can. I won a GP last year and of course I want to win GP’s this year. I feel ready. I feel calm, and I am ready to get it started!”

Glenn Coldenhoff
Monster Energy Yamaha Factory MXGP Rider
“I’m feeling really good going into round one. We just finished our pre-season races in Ernee, France and we have a lot of positive things to take away. I’m feeling really good with the team, with the bike and just in general I am feeling good going into round one. The track is not one of my favourites, but I have had some good results there. It is very hard packed and so the track’s shape depends a lot on the weather. It’s looking to be sunny, and it will be different this year because it is just a one-day event. I am really looking forward to it, I hope to be consistent and to get good starts, stay out of trouble and all in all, I am feeling more than ready for the first round!”

Ben Watson
Monster Energy Yamaha Factory MXGP Rider
“I am feeling good heading to Russia. We have had some great preparation races and in general my feeling with everything has been good. Russia isn’t really my type of track, but I have had good speed in the past and stood on the podium there so no excuses. My goal always remains the same, I keep those to myself but I want to have fun, come away with some solid points and find the areas in which I can improve so I can keep building over the next few weeks.”

Jago Geerts
Monster Energy Yamaha Factory MX2
“I’m looking forward to the first round in Russia. I had a good winter prep this year. We worked a lot on the bike and we made some positive changes which I’m happy about. So, my feeling on the bike is good and I’m really motivated to start the season. I did pick up a small injury last weekend, but my physiotherapist is positive and believes it is possible for me to ride, so I will be on the line and I’m excited to race.”

Maxime Renaux
Monster Energy Yamaha Factory MX2 Rider
“I’m feeling good going into the season, winter training has been long and we are fully ready. It’s gonna be another strange season but I am really excited to get back to racing. I like the track in Russia, it’s a high-speed hard pack track and always fun to ride. The goal is to go into the season step by step. We know that the season is long so I will focus to make some good starts and consistent motos, and let’s see where we finish.”

Thibault Benistant
Monster Energy Yamaha Factory MX2 Rider
“I’m feeling really good to finally arrive at the first race of the season after a really long winter. I really like the track in Orlyonok is has some big jumps and is quite hard like the south of France, which feels like home to me. I am going there with no pressure, I just want to take the experience and to improve throughout the season. I am very ready to start!”