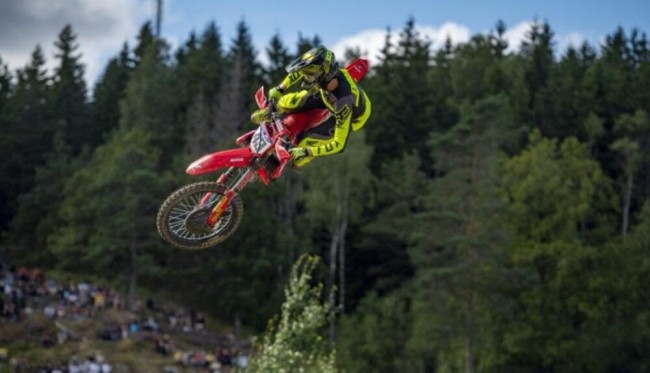 Team HRC duo Mitch Evans and Tim Gajser dominated the qualification race at the MXGP of Sweden, going one-two in a procession of Honda CRF450Rs as they crossed the line well clear of third place.

After a two-year absence, Uddevalla returned to the world motocross championship calendar, and the picturesque venue was at it’s very best as the riders took to the track for each of their three sessions. In free practice, in a sign of things to come, the Team HRC pair went one-two, with Gajser taking the honours this time around as Evans was just 0.2 seconds behind. Timed practice saw themselves both have decent gate-picks inside the top seven, but it was their performance after the qualification race gate-drop that really showed the Swedish crowd who was the best team in the paddock as the two Honda’s quickly moved to the front of the field within the first few corners.

First it was Evans, who came through into the lead, but he was quickly followed by Gajser with the two of them already pulling a little gap before the end of the first lap. Gradually the duo edged further away from third, with both riders making the tricky Uddevalla surface look quite comfortable, putting in laptimes that the rest of the field couldn’t match. By the time Evans received the chequered flag, two seconds ahead of his #243 teammate, third place was over 10 seconds adrift, giving both riders will have the best two gate-picks for tomorrow’s points-scoring motos.

This result has been a long time coming for the Australian, as he finally put all the pieces of the puzzle together in a confident display of riding. He has shown promise on numerous times this season but hasn’t quite been able to do it on the Sunday, so that is his aim now and one that is very much achievable after today’s performance. For Gajser, he’ll be hoping for two good starts and with his extremely healthy 122-point championship, he doesn’t need to extend himself too much on a track that can easily catch out riders who aren’t fully-concentrated. However, the Slovenian will want to finish this record-breaking season with some strong results and if the win is possible, expect him to display the speed that has seen him take eight overall victories already this campaign.

Evans: “It feels really good to get a race win and to be back at the very front of the field. It was a long injury layoff that I suffered and I went through some difficult times, but to be back here is an amazing feeling and just reward for all the hard work I’ve put n. Of course, it is only a Saturday qualification race, so I know I need to replicate this on Sunday in the two motos, but I feel really comfortable out there if I get out the gate well, I feel confident I do the same thing as today. A big thank you to all the people supporting me, to Team HRC for helping me get back to this position and I’m really excited for the motos tomorrow.“

Gajser: “It wasn’t the easiest day, but I came out with a second place in qualification so that was a good recovery. I was seventh in timed practice after P1 in free practice, so that meant I didn’t have the best gate-pick but I was able to make a few moves in the first couple of corners and I ended up in second place behind Mitch. I was able to follow him the whole moto, just running a nice, smooth, consistent pace and we finished first and second. Congrats to him, he rode well and it’s great to see him take a win. Hopefully we can both push for the victory tomorrow and give Team HRC a double-podium.“

Marcus de Freitas: “It was great to see Mitch and Tim running one and two in the qualification race. We always believed that Mitch could run up the front of the field, and he has worked so hard to get in that position again, so we are delighted with his performance. Tim also showed that he has the speed again after a tough couple of rounds, and the pair looked extremely comfortable out front, dominating the race. Of course, are hoping they can do the same tomorrow and that’s what we’ll be trying to help them achieve.“